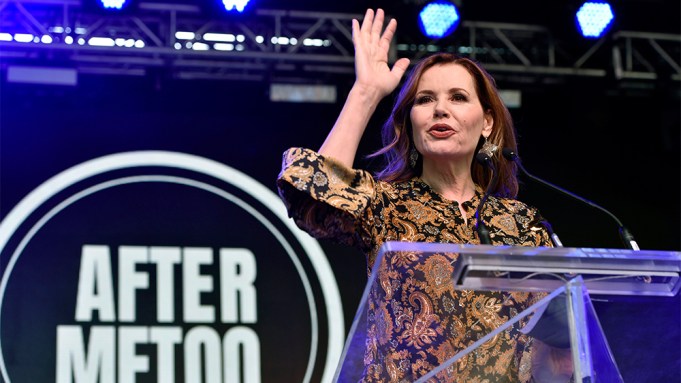 Hundreds of women and men gathered in downtown Toronto on Saturday to protest the lack of opportunities for female filmmakers and to call on the entertainment industry to support a wider range of voices in the movies and shows it makes.

The event, dubbed the “Share Her Journey Rally,” is taking place at this year’s Toronto International Film Festival and drew a range of speakers. Actresses Geena Davis and Mia Kirshner; directors Nandita Das and Amma Asante; and academics such as Dr. Stacy L. Smith shared a mixture of personal stories and bleak statistics that demonstrated the barriers that women and particularly women of color face in an industry that is dominated by white men. Only 4% of directors across the 1,100 top films from 2007 to 2017 were female. Those numbers become even starker when they are broken down by race — only four of those films were from black female filmmakers, two were from Asian female filmmakers, and one was from a Latina director.

Carrying signs that read “men of quality don’t fear equality” and wearing buttons that proclaimed “TIFF I Stand With Women,” those gathered expressed optimism that change was achievable.

“We are part of a movement now, and I do believe that each one of us can make a difference,” said Keri Putnam, executive director of the Sundance Institute.

It’s not just a lack of jobs that animated the crowd on Saturday. The fall of Harvey Weinstein, the indie mogul who was accused by dozens of women of sexual harassment, has led to an industry-wide reckoning. In the year since the Weinstein accusations broke, other high-profile media figures such as Matt Lauer, Dustin Hoffman, Russell Simmons, and Brett Ratner have been accused of sexual misconduct. Speakers at the event said there needs to be an easier way for women and men to report instances of harassment and assault and to hold their assailants accountable. Kirshner, for instance, slammed the “indifference of institutions” and said that companies must do more than simply pledge to have “zero tolerance” for that kind of behavior.

“Unless we improve the conditions where our bodies are respected in the workplace, I don’t see how we’ll have our minds respected and achieve leadership,” said Kirshner.

The event also made it clear that as difficult as the situation has been for white women filmmakers and performers, women of color have consistently been denied opportunities for advancement in the entertainment business. They are less likely to have lead roles in major motion pictures, they earn less money for the work they do, and they are not offered as many chances to direct big-budget productions. Race, speakers such as Asante argued, must be a key part of a larger conversation about opportunities for women.

“Every day I dream of a world in which the necessity to talk about this is absent and where my fellow women artists can speak about their art rather than campaign to do it,” said Assante.

Davis, the “Thelma & Louise” star and the founder of the Geena Davis Institute, a research group that explores gender representation in media, said that children’s programming is key. Data suggests that programming geared at younger viewers tends to have a disproportionate number of male protagonists.

“Why are we training [kids] to have unconscious gender bias?” Davis asked.

Earlier in the day, the festival committed to gender parity on its board of directors and within its executive ranks. TIFF also said it will make public the gender and race of all the members of its selection committees and programmers, along with its consultants.

The festival has made a point of promoting female filmmakers and underrepresented directors in its most recent incarnation. Of the 342 films screening this year, about 36% are directed by women. That’s up from 33% in 2017.

On Saturday, many of the people who took the stage said they struggled with being identified as “women directors.” They dreamed of a time when their race or gender would no longer need to be discussed and when they could focus on the films they make. Until that time, they said they were committed to rallying more women to their cause and drawing attention to the need for more representation both in front of and behind the camera.

“Yes, I’m a woman director, and I want more of us out there,” said Das, adding, “we have lots of stories to tell. Please just hear them.”