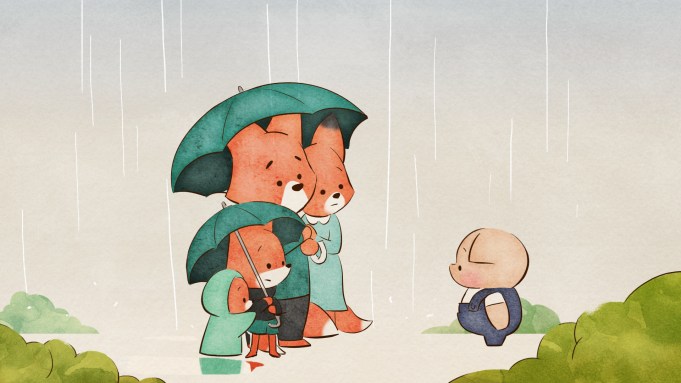 Fresh of their win for best animated series at June’s Annecy Animation Festival, Tonko House has granted Variety access to a full episode of the series adaptation of their Oscar-nominated short film “The Dam Keeper.” The episode has not been seen previously outside of Japan.

In addition to the attention from the Academy, the short film also earned nominations at Berlin, Toronto and the Annies.

“PIG: The Dam Keeper Poems,” directed by Eric Oh, is a short format, dialogue-free series available on Hulu in Japan. The series follows a much younger Pig than does the short, which is available for purchase on iTunes and Amazon worldwide.

In the series, little Pig’s father builds him a small house on a hill and a dam and windmill to keep a sinister black cloud at bay before heading off to find a more permanent solution. Pig interacts with the other animals that live in his community and together they protect their home. All the while, Pig is torn between his responsibility to protect the hill, and a desire to find his father.

Tonko House has partnered with Hulu in Japan on production for the series, and will be releasing the second in a trilogy of graphic novels featuring the characters on July 10. The first book was nominated for an Eisner Award, one of the most prestigious prizes a graphic novel can receive.

In the episode Tonko House shared with Variety, we meet Pig and a few of his friends, as well as a pair of easily-offended anthropomorphic fruits. Eventually Pig runs into a dark cloud version of himself, and is forced to figure out the link between the apparition and the new aggressiveness of the larger cloud.

Tonko House’s Daisuke “Dice” Tsutsumi talked with Variety about the origins of the company, the importance of an Oscar nomination and some of their plans for the future, including a Dam Keeper feature.

Beyond pride and sense of achievement, what did the Oscar nomination mean for Tonko House?

It was a great honor and surprise. Through this nomination, we were able to meet so many incredible individuals in the industry and it humbled us to be welcomed as a part of the larger filmmaking community shortly after we had taken the leap in leaving Pixar to found our brand-new studio.  The awards, and the doors they opened, brought out a certain awareness of how much we want — and need — to grow as filmmakers truly belonging to this group.

“The Dam Keeper” was never quite a conventional animated film and the groundswell of enthusiasm signaled to us in our earliest days of Tonko House that perhaps the industry and audiences around the world do have a thirst for projects that break the mold.

What were the major challenges and fears you faced in starting your own studio?

We are a self-financed independent studio. We began in a position where we needed to learn everything ourselves, not just in making great films but also in getting our projects financed and building our business strategy.  We even learned to make the studio’s furniture ourselves, literally DIY, and to this day, clean our office and participate in daily exercises as a team, amongst other things that we do together.  Simply put, we call ourselves a DIY animation studio.

It’s been four years since we started out and we have been through some major ups and downs on this journey. That experience has been absolutely priceless. We feel we have learned a lot of things on our own that we would not have if we had stayed within our comfort zones working in the big studios.

Can you describe the Tonko House style, if in fact there is one?

Our mission is “to balance entertainment and awareness.” Our stories need to be entertaining yet at the same time we need to push our limits to achieve a deep awareness of where each of these stories comes from and how they can affect the world.

We love stories that resonate with and grow in the heart of their audiences long past the runtime of a film. We are fans of Hayao Miyazaki’s films and classic Pixar movies. The best of these stay with you forever.

At the same time, we aren’t trying to be like one or the other; we strive to tap into our own unique voice and brand of storytelling that will have that lasting effect, we hope, with new audiences and generations.

With the rise of new platforms and a growing international market, the traditional Hollywood model may not be the only tried-and-true way to create successful animated films and franchises.  We believe these changes may be beneficial to creators like us.

What’s next for Pig and his companions?

The world of “The Dam Keeper” is a deepening universe with more characters, places and storylines that have yet to be shared. What we have shared, and what you have seen thus far, is just the tip of the iceberg. We are currently working on a slate of projects, many of which have exciting partners from different fields of entertainment attached, and with each of these unique projects, we continue to strive for new ways to tell and make our stories.

We are also currently in development on “The Dam Keeper” feature, which would be geared toward a wide release and combine both our strong Western and Eastern sensibilities. Thus we also believe the film will be unlike other stories saturating the market right now. To make this project successful requires strong vision and perseverance from everyone involved but we are up for the challenge. At heart we are fans of animation and committed to making the kind of content we ourselves are hungry for: New stories and original worlds that don’t treat animation as a defined genre.