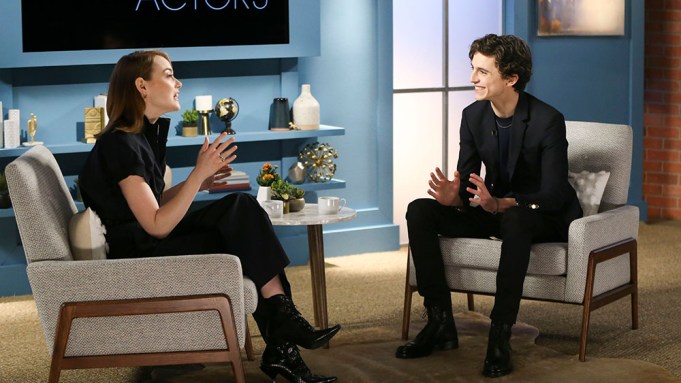 Timothee Chalamet says earlier in his career, he felt like a “fraud.” When he attended a screening of Christopher Nolan’s film “Interstellar,” he was among famous co-stars like Anne Hathaway, Jessica Chastain, and John Lithgow.

“And I really had no career at this point, so I was the fraud a little bit, in the room,” he confesses.

The “Beautiful Boy” star also says he “wept for an hour” after the screening because he expected his role in the 2014 sci-fi film to be bigger than it was. Since then, Chalamet has gone on to star in critical darlings like “Call Me By Your Name” and “Lady Bird,” and the actor speaks with Emma Stone about early rejections during Variety’s Actors on Actors series.

Chalamet says he didn’t get booked for a “Spider-Man” film or Tim Burton’s “Miss Peregrine’s Home for Peculiar Children” in 2016. Stone, who stars in the period dramedy “The Favourite,” says she lost out on “Alice in Wonderland,” another Burton movie.

Ironically, Chalamet says he found the most success doing independent films like “CMBYN” and “Lady Bird,” as opposed to big blockbusters.

“That’s what helps me not be cynical and inspired about the landscape we’re in now. If studios controlled things more before, now people want a mirror in the things they see,” he says. “They want to see things shot in a way where they don’t feel the sheen of Hollywood is there, or so I think. And they want to see stories that feel real.”