Timothee Chalamet, Armie Hammer Offering Oscar Sweepstakes for a Cause 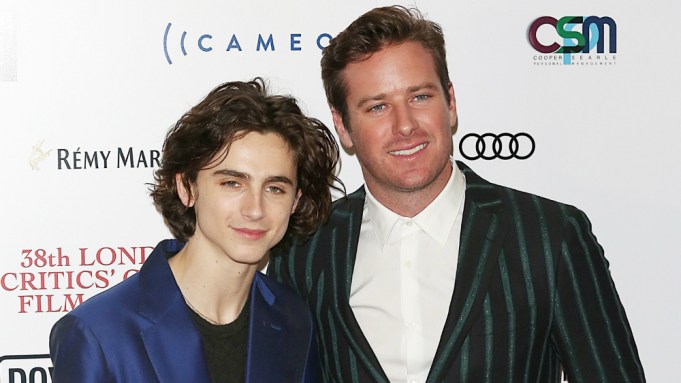 The “Call Me By Your Name” cast is using their Oscar platform to give back.

In a new campaign with online fundraising platform Omaze, stars Timothee Chalamet and Armie Hammer, along with director Luca Guadagnino, are raising money for the Trevor Project and Foundation for the AIDS Monument by offering an Oscar-eve celebration sweepstakes. A winner will be chosen from those who donate to fly to Los Angeles on March 3, the night before the Oscars, and attend a private Sony Pictures Classics dinner with the cast.

The sweepstakes winner will also receive a copy of André Aciman’s “Call Me by Your Name” novel, signed by Aciman, Chalamet, Hammer, Guadagnino, Michael Stuhlbarg, and screenwriter James Ivory, along with a vinyl LP signed by Sufjan Stevens, who is Oscar-nominated for the film’s song “Mystery of Love.”

In a promotional video for the campaign, Chalamet says they’ll “have a couple of drinks” with the winner, while Hammer promises they “will get s—faced.”

The Trevor Project, a non-profit based in Los Angeles, provides crisis intervention and a 24-hour suicide hotline for LGBTQ youth, while the Foundation for the Aids Monument is raising money for a West Hollywood monument honoring those affected by HIV/AIDS.

“Call Me By Your Name” is up for four Academy Awards, including best picture, actor for Chalamet, adapted screenplay, and song.