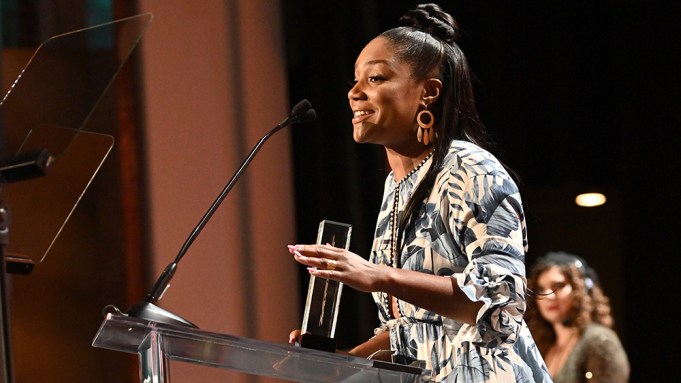 “Sorry I’m so honest, but I’m not sorry,” Tiffany Haddish said at Variety’s Power of Women presented by Lifetime on Friday. The “Girls Trip” star had just finished a rapid-fire shoutout to everything and everyone in the room, from Regina King’s hairstyle to FreshPaper’s ability to keep weed fresh.

“I feel like it’s very important to always be your best self and be yourself, and try not to be something you’re not,” Haddish said at the annual luncheon held at the Beverly Wilshire Four Seasons Hotel in Beverly Hills, Calif. “Because that’s when you become a bitter-ass bitch, when you being somebody you not.”

Haddish also praised fellow honorees like King and “The Chi” creator Lena Waithe, whom she said inspired her to be authentic.

“Lena, you have inspired me so much to be more open and more loving toward others, and your creativity and your writing and your ‘I don’t care, I’m going to wear what I want to wear and be who I am.’ I love that,” Haddish said.

The Emmy winner said she remembered feeling unsafe and “afraid to be herself” growing up, and it was thanks to mentors who encouraged her to express herself that she embraced performing arts. Now, Haddish returns the favor and works with organizations like the Unusual Suspects Theatre Company in the San Fernando Valley to empower children in underserved communities.

Haddish finished the night with a few more quips, including about her one male (but not gay, she made a point to note) member of her team, and signed off with her signature phrase: “Y’all remember to be your best selves always. She ready.”