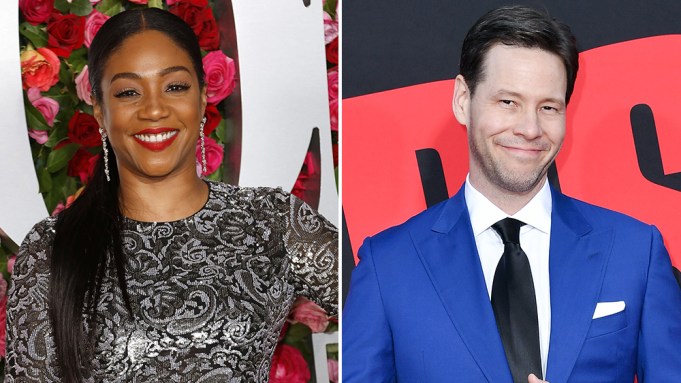 Roadside Attractions and Topic Studios have partnered to buy North American rights to the holiday season comedy “The Oath,” starring Tiffany Haddish and Ike Barinholtz, with a plan for a fall release.

“The Oath,” Barinholtz’s directorial debut, centers around a couple whose Thanksgiving takes a turn for the worse when two federal agents wind up being held captive in their living room. Barinholtz also wrote the script.

“The Oath” is produced by Sean McKittrick & Ray Mansfield of QC Entertainment, Barinholtz and David Stassen of 23/34 Pictures and Andrew Robinson of Aperture Media Productions. Haddish served as an executive producer along with QC’s Edward H. Hamm Jr. and Kristen Murtha.

“Ike’s hilarious directorial feature debut reinvents the holiday comedy for our times,” said Roadside Attractions chiefs Howard Cohen and Eric d’Arbeloff. “He and Tiffany make one of the greatest on-screen couples we’ve seen, and their family Thanksgiving troubles will have audiences laughing at our uncertain political madness without checking their intelligence at the gate.”

Haddish broke out in last year’s “Girls Trip” and will star in two other comedies this fall: Universal’s “Night School” with Kevin Hart on Sept. 28 and Paramount’s Tyler Perry comedy, “Nobody’s Fool,” opening Nov. 2. She’s also joining Hart in the voice cast of Universal’s “Secret Life of Pets 2,” out on June 7, 2019.

Barinholtz most recently was seen opposite Mindy Kaling in the sixth and final season of “The Mindy Project,” where he also wrote, produced and directed episodes. He also starred as one of the parents in the comedy “Blockers.”

QC Entertainment produced and financed Jordan Peele’s “Get Out” and Spike Lee’s upcoming “BlacKkKlansman,” which premiered at Cannes and won the Grand Prix Award.

Howard Cohen and Ryan Heller negotiated the deal for Roadside Attractions and Topic Studios, respectively. UTA and QC, who co-repped the film for domestic sales, negotiated on behalf of the filmmakers.