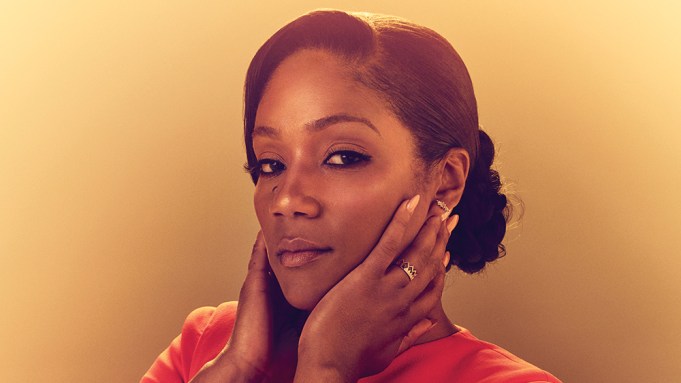 But asked what the trophy means to her, Haddish says, “Can I be honest? Not that much! Because I didn’t get a check with it.”

It’s not that she doesn’t appreciate the honor — as her friend Jada Pinkett Smith explained to her, it’s a sign of respect from her colleagues. But Haddish has far more practical priorities.

“I care about being able to take care of my grandma, my mama, my niece, my sister, and brother, and if I ever have children, take care of them, create some generational wealth,” she says. “The only way to do that is to have some money so you can buy some land. I need checks!”

Haddish has long been frank about her struggles, including “being homeless and hungry” in her 20s. What she learned from that experience is to “know your worth, and don’t settle for less,” she says.

That’s a message she wants to pass along to the next generation, particularly girls. She visits elementary schools regularly, and can’t help noting that while boys are praised for their accomplishments, girls are told to “sit down, be quiet, be pretty.” “F— that! You are smart! You’re dope. You deserve the best!” she says. “That kind of language needs to be happening more especially for young women.”

That’s why she works with Unusual Suspects Theatre, which offers workshops to students and adults in underserved high schools and communities. Introduced to the program by an executive at Universal, Haddish immediately was hooked on its potential. “This needs to be everywhere,” she says. “Because a lot of schools are cutting out drama and things where you learn to have a voice.”

Along with money, she’s donated ample time to the organization, leading rehearsals and mentoring the kids. Given her own difficult upbringing, such a program “would have meant the world to me,” she says. “I definitely would not have been in as much trouble as I was in in school. It teaches you when to do something — and when not to.”

It’s that hard-won confidence that fuels her career goals. “I just know I’m doing what I love to do,” she says. “That’s where my comedy comes from: I believe in who I am.” There may be some setbacks along the way (“Sometimes you just gotta bump your head,” she jokes, “get a few concussions”), but she’s got her eye on the prize. “I want to own a studio, because then I could create what I want and I can create a platform where others can come and create what they want,” she says. “Because for so many years I’ve been told, ‘No, you can’t do this. No, we don’t want that.’ Well, fine. I’ll do it on my own.”

For a full Q&A with Tiffany Haddish, click here.