Golden Globes: ‘This Is Me’ From ‘The Greatest Showman’ Wins Best Original Song 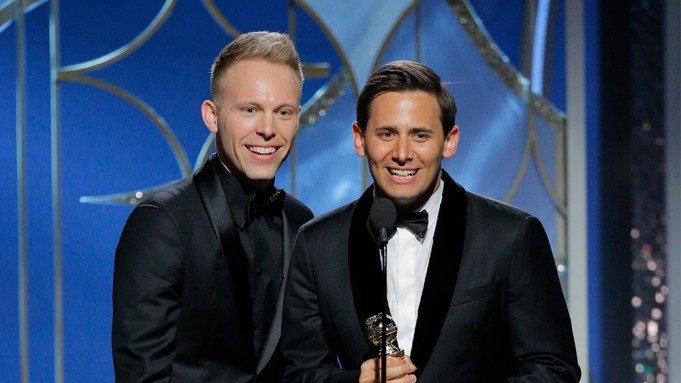 “This Is Me” From “The Greatest Showman” won the Best Original Song award at the Golden Globe Awards on Sunday night.

The song is the second consecutive win for songwriting duo Benj Pasek and Justin Paul, who took home last year’s prize for “City of Stars” from “La La Land.” The duo also wrote the music for “Dear Evan Hansen.”

Four of the last five winners of best original song at the Golden Globe Awards went on to win the Academy Award for original song, including “City of Stars” from “La La Land,” Sam Smith’s “Writing’s on the Wall” from “Spectre,” Common and John Legend’s “Glory” from “Selma,” and Adele’s “Skyfall” from the film of the same name.

The four other nominees were:

“Home” From “Ferdinand”
The music by Nick Jonas, Justin Tranter, and Nick Monson (with lyrics by Jonas and Tranter) scores 20th Century Fox’s animated comedy based on the children’s book of a loving and non-violent bull.

“Mighty River” From “Mudbound”
The song from this period a period drama that follows the lives of two families — one black and one white — in the post-World War II Jim Crow South, the emotional song was sung by Mary J. Blige (who was also nominated for Best Supporting Actress for her role in the film) and was written by Blige, Raphael Saadiq, and Taura Stinson.

“Remember Me” From “Coco”
The heartfelt and upbeat lullaby from Disney and Pixar’s “Coco” was written by Kristen Anderson-Lopez and Robert Lopez.

“The Star” From “The Star”
Mariah Carey and Marc Shaiman co-wrote and produced the title track from “The Star,” Sony’s animated Christian comedy.