The box-office grosses for 'Solo' have a meaning beyond financial failure. 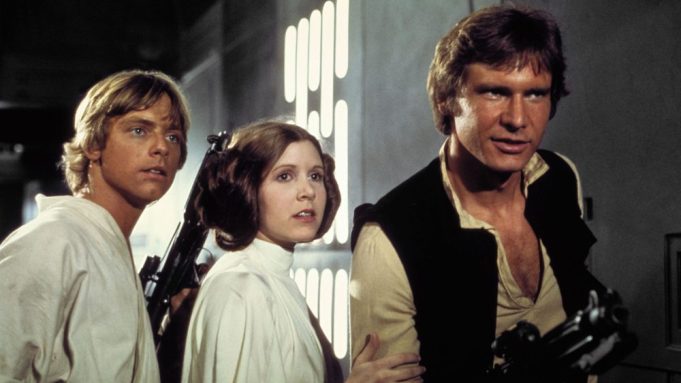 Is there a poetic meaning to box-office grosses? That sounds like a silly question, but I’m serious. Is there a value and a karma to the numbers beyond the obvious value, which is that movies need to make money, preferably a lot of it? (They’re too expensive to exist otherwise.) Blockbusters cost a fortune, both to create and to market, and if they don’t make that fortune back there’s a problem. If a franchise film isn’t successful — if it falls on its face — that may suggest the franchise is in trouble, that going forward it will have to fight to hold onto the popularity it once achieved with a snap of its fingers.

If you’re wondering whether that’s now going to be a problem for the “Star Wars” franchise, the answer, in any immediate sense, is probably no. “Solo: A Star Wars Story” had a disarmingly lackluster opening weekend, only to plunge to even more stunning levels of commercial indifference in its just-completed second frame. Yet it would be a naïve bit of Chicken Little to think that the Star Wars Cinematic Universe — that’s not what it’s called, but I’ve just named it that, since that’s what it now is — is somehow “in trouble.” With “Solo,” the “Star Wars” brand has been nicked and dinged; it may even have suffered a fender bender. But it will recover.

The rationalizations for the film’s failure have all been dutifully noted and proclaimed. It came out too soon after “Star Wars: The Last Jedi,” generating a rare feeling of “Star Wars” overkill. The very public firing of Phil Lord and Chris Miller from the project last June created a who’s-piloting-the-ship? aura around the movie (and Ron Howard, unfortunately, did not turn out to be the Han Solo — or the Victor Fleming — of co-pilots; his direction is earnest and sodden enough that you can’t help but wonder whether he just made it worse).  And, of course, if you had to search the greater galaxy for the wrong actor to play the young Harrison Ford, you probably couldn’t do much better than Alden Ehrenreich, who may be a handsome dude but is — obviously! — too short, too scowlingly officious, not reckless-swaggery-rebel-dickish-cool enough. I do get that Han, in “Solo,” isn’t supposed to be fully formed yet, but Ehrenreich comes off like a preppie boy sent to do a man’s job.

When “Star Wars: Episode IX” gets released, in December 2019, the movie will suffer from none of those factors. It will have been a year-and-a-half since the previous “Star Wars” film, just enough of a yawning chasm to re-stoke everyone’s interest. The director will be J.J. Abrams, whose middle named might be “Reliable.” And since, unlike the stand-alone “Solo,” it’s the concluding chapter of a trilogy, how could anyone invested in the Stars Wars Cinematic Universe not go? We all lined up (God help us) to see all three of the Lucas prequels, because by the time “Revenge of the Sith” came out, they had just about become a form of pop-culture blackmail: Stick with us one more time (really!), and we promise we’ll turn the birth-of-Darth-Vader saga into something worthwhile!

In a funny way, those movies didn’t turn into something worthwhile for the same reason that Alden Ehrenreich never convinced me he was the young Han Solo: Hayden Christensen never convinced me that he had the majestic malevolence to put on Vader’s heavy-breathing, heavy-metal helmet. The bottom line, though, was that we had to go and check it out. And the check-it-out factor is sure to sustain “Star Wars” for one more film, and probably for one or two more after that.

But then we enter the all-bets-are-off zone, and it’s here that you have to go back to the box-office grosses for “Solo” and what they mean, beyond the raw fact that “Solo” itself is a huge dud. What we once called the “blockbuster mentality” — it’s now simply the way things work in Hollywood — was placed on the map by two films of the ’70s, “Jaws” and “Star Wars.” “Jaws,” famously, was the movie that invented it, but it was “Star Wars” that gave the blockbuster mentality religion. The grosses for “Star Wars” weren’t just awesome, staggering, ginormous; they were shocking. Overnight, they suggested the creation of a new world order.

We’ve never stopped talking about what the new world order meant for Hollywood: more fantasy and action, more FX and escapism. The popcorn impulse devouring the cosmos. But what it meant for moviegoers wasn’t simply a paradigm shift in taste. It was about fans taking their cue — and, in a way, their whole orientation — from the box office as faithfully as studio executives once did. The box office would now tell you which movies you wanted to see, which movies were worthy, which movies could inspire a fan base that was the club you wanted to belong to.

The film that incarnated the new populist fundamentalism was “Star Wars.” There have now been 10 “Star Wars” films, and right up until “Solo,” each and every one of them produced the kind of box-office grosses that were potent enough to bend the universe with the magnetic power of their the-whole-world-is-watching! hegemony.

I’m not just saying that each film was a monster hit. I’m saying that each time, a ritual was enacted: a financial/spiritual spectacle of mass adulation. The “Star Wars” movies were all, in essence, sequels to the original “Star Wars” (even the prequels were sequels), and what they did wasn’t merely to “continue the story.” They revived the feeling, each time, of letting you join a club of moviegoers that was the biggest club there is: “Star Wars” fans. Otherwise known as: Everybody. The original 1977 “Star Wars” is still a great movie, but in hindsight the aura that surrounded its success also looks like an early rehearsal for a new breed of American pop-cultural fascism. The kind where everyone’s on board, and no nay-sayers are allowed.

That was, and is, an essential part of the appeal of “Star Wars,” and the same dynamic applies to every “Star Wars” movie since. We can love them, hate them, be disappointed by then, debate them, or change our minds about them (true confession: I actually now like “The Phantom Menace” more than I did the first time I saw it), but what never changes is that the nonstop tsunami of audiences that come out to see these films validate their status as biblical entertainment events. They exist on their own supreme mass-audience level of populist transcendence.

The failure of “Solo” blows a hole in all that. It brings the relationship between “Star Wars” movies and their fans crashing down to earth. It’s the first “Star Wars” film whose box-office performance says: This is just another movie. Another installment in another cinematic universe that provides another hour of diversion for another substratum of entertainment consumers who don’t finally care that much whether all of this really means anything. It’s possible, and even probable, that some “Star Wars” fans have been feeling those whispers of underlying apathy for a while. But the box-office performance of “Solo” makes it official that “Star Wars” is a religion that has begun to lose its faith. The faithful may still show up for a while, but that only indicates why they may ultimately fade away: The business of worship should never become a habit.