Continue to Variety SKIP AD
You will be redirected back to your article in seconds
Jun 13, 2018 3:12pm PT 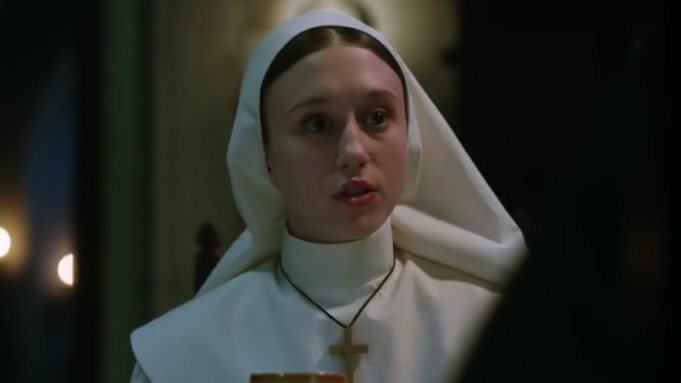 Warner Bros. has released an unsettling first trailer for “The Nun,” with the demonic sister from “The Conjuring 2” returning to terrorize Taissa Farmiga’s novitiate at a remote convent.

The footage starts with a woman’s voiceover describing her visions of an evil nun, followed by a gravel-voiced sister asserting, “The abbey has a long history — not all of it good.”

The official synopsis: “When a young nun at a cloistered abbey in Romania takes her own life, a priest with a haunted past and a novitiate on the threshold of her final vows are sent by the Vatican to investigate. Together they uncover the order’s unholy secret. Risking not only their lives but their faith and their very souls, they confront a malevolent force in the form of the same demonic nun that first terrorized audiences in ‘The Conjuring 2,’ as the abbey becomes a horrific battleground between the living and the damned.”

Producers are James Wan, who directed the two “Conjuring” movies, and Peter Safran, who produced both movies. The current script for “The Nun” is written by Gary Dauberman and Wan.

The demon nun came to life in “The Conjuring 2” from a painting by Patrick Wilson’s paranormal investigator Ed Warren and later attacked Vera Farmiga’s Lorraine Warren. Demián Bichir stars as the priest summoned by the Vatican.

The four movies in the “Conjuring” universe — which include the two “Annabelle” titles — have generated more than $1.1 billion worldwide. “The Nun” will open on Sept. 7, the same weekend on which “It” opened last year. “It: Chapter 2” opens on Sept. 6, 2019. Watch the trailer above.