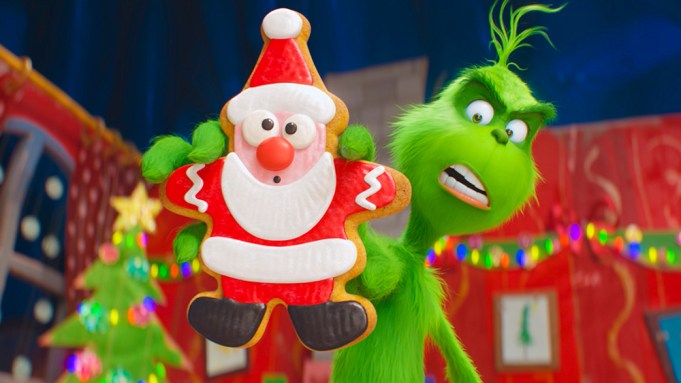 It’s never too early to cash in on a little Yuletide spirit.

Universal and Illumination are seeing green as “The Grinch” anticipates to earn between $55 million to $65 million when it launches on 4,140 screens. The animated comedy is expected to dominate over “The Girl In the Spider’s Web” and “Overlord,” the two other wide releases hitting theaters this weekend.

“The Grinch” is the second Dr. Seuss story that Illumination, the studio behind “Despicable Me,” “The Secret Life of Pets,” and “Sing,” has brought to the big screen. In 2012, the animators produced “The Lorax,” which launched with $70 million and went on to pick up over $348 million globally. Both “Grinch” and “Lorax” carried production budgets around $75 million.

This marks the third time “Grinch” has gotten the Hollywood treatment. Following the 1966 animated TV special, the grumpy green creature snagged a 2000 feature film with Jim Carrey. Carrey’s rendition, “How the Grinch Stole Christmas,” is still the second-biggest holiday movie of all time with box office receipts over $345 million worldwide.

Until Disney’s “Ralph Breaks the Internet” hits theaters later this month, “The Grinch” won’t have much competition among the family crowd. Last weekend, Disney’s “The Nutcracker and the Four Realms” crumbled at the box office. It earned just $20 million — a disastrous start given that the holiday fantasy took $125 million to make.

For Sony, “The Girl in the Spider’s Web” is eyeing a start between $10 million to $15 million from 2,400 venues. The studio, which is co-producing the movie with Columbia, MGM, and New Regency, is tempering expectations, projecting $8 million for the three-day period. While a debut in the mid-teens would be on par with David Fincher’s “The Girl With the Dragon Tattoo,” the first film in the Millennium series, the sequel arrives with significantly less hype. The original entry opened with $12.7 million in 2011 and had long legs throughout the holiday season as it went on to generate $102 million in North America and $230 million worldwide. The follow-up, however, cost half as much. “Dragon Tattoo” carried a $90 million price tag, while “Spider’s Web” was budgeted at $43 million.

Fincher’s film starred Rooney Mara and Daniel Craig, though this movie reboots the series with new actors and sees Claire Foy taking on the role of computer maven Lisbeth Salander. Based on the novel by David Lagercrantz, “The Girl in the Spider’s Web” was directed by Fede Alvarez and co-written by Alvarez, Steven Knight, and Jay Basu.

“Spider’s Web” will certainly benefit from counter-programming against “The Grinch,” but it likely won’t be enough to top the second weekend of Fox’s “Bohemian Rhapsody.” If the Queen biopic enjoys another solid weekend in theaters, it could earn another $25 million to $30 million in its sophomore frame. Since adult audiences don’t traditionally come out in droves on an opening weekend, Sony is banking on an older crowd to turn out for “Spider’s Web” during the Thanksgiving break to fill seats for the R-rated thriller.

The weekend’s final wide release, Paramount’s “Overlord,” is aiming to bring in between $8 million and $13 million. J. J. Abrams produced the war horror film, which debuts in 2,850 locations. It follows a handful of American soldiers who are dropped behind enemy lines just before D-Day and discover secret Nazi experiments. With titles like “The Nun” and “Halloween” overperforming in recent weeks, it stands to question if the current horror wave will translate to success for “Overlord,” which isn’t based on a familiar property.

Attempting to capitalize on election day buzz, Sony and Columbia Pictures are launching “The Front Runner” in four theaters in Los Angeles and New York on Tuesday. Hugh Jackman stars in the political drama as former senator Gary Hart.

With “Bohemian Rhapsody,” “A Star Is Born,” and “Halloween” still drawing crowds, the domestic box office is up over 10% compared to last year. That momentum should continue in the run-up to Thanksgiving, one of the busiest times for moviegoing. A number of buzzy titles including “Fantastic Beasts: The Crimes of Grindelwald,” “Creed 2” and “Ralph Breaks the Internet” enter theaters this month.