Netflix’s Ted Sarandos: Viewers Will Love ‘Roma’ at Home, on Their Phones 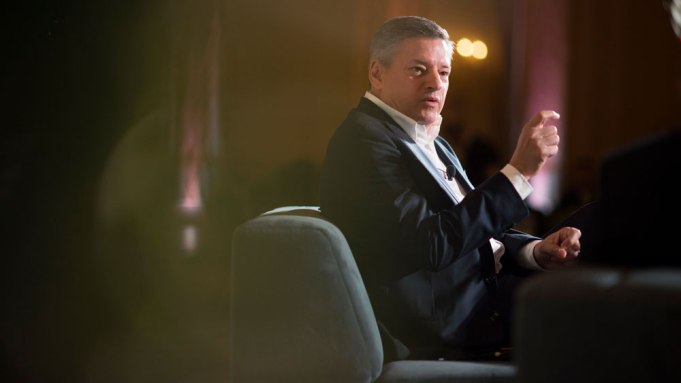 As he told the crowd Thursday at Variety‘s annual Dealmakers breakfast at the Montage Hotel in Beverly Hills, he can often be found at his local multiplex, redeeming tickets he bought himself.

“Who I never run into there are studio executives and directors,” Sarandos said, earning laughs from attendees including executives, lawyers and, yes, studio heads.

Sarandos was honored as Variety’s dealmaker of the year, having lured top drawer creators like Ryan Murphy, Shonda Rhimes and Kenya Barris to his streaming service with rich overall agreements. He sat for a wide-ranging conversation with Variety co-editor-in-chief Claudia Eller, in which he pondered how odd it was that his monolithic entertainment company is no longer the wave maker in the shifting new media universe.

“I’m in a very weird spot right now because we’ve always been the disruptor, the wild card. Oddly, we find ourselves in this place now where we we’re about the only player in town that makes deals where you know exactly what it’s going to be next year. You make a deal to make a movie at Netflix? Next year, it’s going to be a movie at Netflix. That’s for sure,” Sarandos said.

“I don’t know that any other studio can say that. They’re in flux. When you make a movie at Fox-Disney, is it going to be at Fox or Disney? Or will it be on the streaming service? When you go to Warner Bros., will it be on screens or the streaming service? All those things, who can own what, when and where — all of those things are in play. We’ve become the steady player in the market over the past couple of years,” said Sarandos.

Indeed, traditional media companies and film studios have been turned upside down by big mergers and demands from shareholders to get in on the Netflix model and offer their own direct-to-consumer offerings. Both Disney, which is poised to swallow the film and TV assets of Fox, and the now AT&T owned Warner Media, are launching new streaming services, and other big players are sure to get into the game. Sarandos claims he is not worried about the intrusion, despite the fact that Netflix will invariably lose some prime licensed content from Disney, Warner and others.

Not that it’s all smooth streaming for Netflix, which blinked earlier this year in offering limited, exclusive theatrical windows for several titles, including its Best Picture Oscar hopeful, Alfonso Cuaron’s “Roma.” Most U.S. exhibitors demand 90 days of exclusivity at their cinemas before a film goes to the iTunes store or other home entertainment platforms. Netflix had refused to play ball until Cuaron’s widely praised film came around. The major theater chains continue to rebuff Netflix’s efforts by refusing to play its movies.

Eller questioned the wisdom of Netflix not allowing a cinematic masterpiece like “Roma” to live longer in theaters given its technical and emotional feats.

“They’re gonna love ‘Roma.’ They’re gonna love it on their phone,” the executive said, acknowledging that most global viewers wouldn’t be able to see the acclaimed drama in theaters. He added: “I have a 22-year-old son … who is a film student, who has only seen ‘Lawrence of Arabia’ on a phone. He thinks it’s one of the greatest movies of all time. Most people see most movies that change their lives at home.”

“With ‘Roma,’ we’re so proud of the film. It’s playing on 500 screens around the world. It’s playing in sold out shows. In Mexico, the president opened up the presidential palace as a cultural center to screen the film for free. We’re thrilled with the reception,” said Sarandos, refusing to divulge the film’s actual box office results. “But I want to get it to as many people we can, and the best way to do that? We have more than 137 million people watching Netflix,” he continued.

About serving those 137 million subscribers, more whale-sized creator deals are on the horizon, Sarandos said, as he seeks a “unique breed of showrunner. I don’t think we’re going to do hundreds of these deals but we will do more than we’ve done today.”

Doing “more than we’ve done today” could be a mantra at Netflix, which seems to be expanding by the minute with more and more content being added to the company’s already crowded shelves. While Sarandos declined to project what Netflix will be investing in content in 2019, he did say it would exceed the more than $8 billion the streamer paid out this year.

One show-stopping deal that piqued global interest was when it was announced in May that that Barack and Michelle Obama would be setting up their Higher Ground Productions at Netflix.

Sarandos insists the operation is an honest-to-god Hollywood production shop.

“This is not an extension of a political point of view, there’s a real creative environment,” he said. “The one thing about the president and the first lady is they are incredible consumers of storytelling. The love film, love television, they read ferociously. They want to be able to take their world experience and work with creatives, work with these relationships they’ve developed over the years and create great television, film, scripted, unscripted programming that tell really inspiring stories, regardless of the form.” Sarandos reports that the Obamas are already fast at work at developing content, which will begin to roll out in 2020.