Now that marijuana is legal in nine states, will studios look for that second hit? 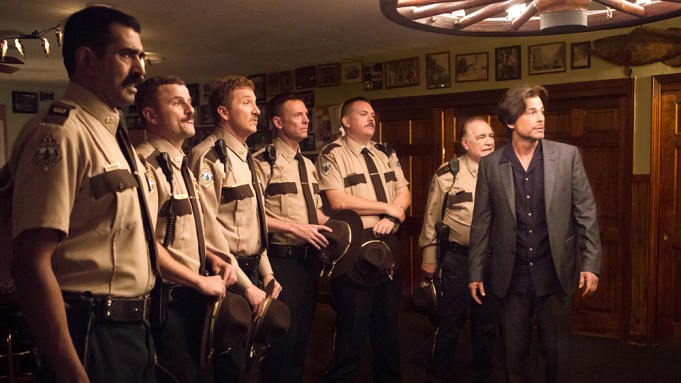 April 20, recognized among marijuana users as the international holiday of 4/20, falls on a Friday this year, which turns out to be the perfect release date for Fox Searchlight’s “Super Troopers 2,” the long awaited sequel to the 2001 stoner-movie classic “Super Troopers.” It will open wide on 2,400 screens.

“Fox Searchlight chose 4/20 as the release date,” director Jay Chandrasekhar says. “It tested better than any of the movies we’ve ever made before. There’s real enthusiasm at Fox over this film.”

That’s not often the case with so-called stoner movies, which have endured waves of acceptance and industry reticence over the years. But now with marijuana legalization in full swing in nine states, including California, have the studios come around to stoking that market again like Cheech & Chong did during the decriminalization wave of the ’70s with “Up in Smoke” and several sequels into the ’80s?

Forty years ago, “Up in Smoke” lit up screens with its slapstick version of the stoner life. Cheech Marin and Tommy Chong were a standup comedy team who’d had success with a number of albums on Lou Adler’s Ode label. Adler and the duo teamed up on “Up in Smoke,” with Chong taking over the director’s chair during the film’s production. The zany movie laid out the blueprint for what would become the modern stoner comedy: two male friends, one more stoned than the other, go on some sort of quest as they thumb their noses at authorities, meet off-the-wall characters and do various drugs.

To Marin, all the Cheech & Chong movies are “just one long tale” of the daily travails of two stoners. “They were improvisational movies. It looked like there were stories there, but the plots were a day-in-the-life. That was much funnier than any three-act plot that was out there. It really gave that sense of being in the moment. That’s why they’ve endured all this time.”

But that lack of structure marred the sequels, Chandrasekhar says. “‘Next Movie’ and ‘Nice Dreams’ are not as strong as ‘Up in Smoke.’ There are scenes in those movies that are fantastic, but had they written 10 more drafts and organized the structure a little better, they would’ve had greater success. The best comedies are the ones with the most drafts.”

With that in mind, Chandrasekhar got to work on his sequel. Despite the fact that “Super Troopers” had earned a respectable $18.5 million in 2001, Fox wasn’t convinced there was an audience for a follow-up to the film about pot smugglers and rival police forces in Vermont. During the interim, Chandrasekhar became an in-demand TV director (“The Goldbergs,” “New Girl,” “Royal Pains,” “Community”) and helmed “Beerfest,” “The Dukes of Hazzard” and “Club Dread.”

Chandrasekhar decided to crowdfund the money as was done for the “Veronica Mars” movie.  “We figured if they have a fan base we probably do too,” he says. “We hired the same crowdfunding expert who did the ‘Veronica Mars’ campaign. He did his research and said there was a fertile opportunity here. And so we did it. It was a high-risk bet, but like all film it’s high risk. The risk was if the audience didn’t donate to the campaign, Fox was going to look at us and say, ‘See, nobody wants to see this movie.’”

The crowdfunding campaign went better than expected, raising $2 million in the first 24 hours. They eventually received $4.7 million, which was enough to raise eyebrows at Fox. “They called and said, ‘Wow, you guys were right,’” Chandrasekhar says. “That’s when the campaign really began.”

Chandrasekhar was able to bring in $8 million more in private financing. The total budget after the rebate in Massachusetts, where “Super Troopers 2” was filmed, was $13.5 million. “If you spend $10 million in Massachusetts, they give you a check for $2.8 million, because you put money into the state and all those jobs. You take that $2.8 million and add it on top of the budget. That’s why movies shoot in Atlanta — they give you a 30% rebate. Where they have the good rebates, that’s where all the movies go.”

The $13.5 million budget for the sequel far surpassed the original’s $1 million budget. The 2001 film features the comedy troupe Broken Lizard (Chandrasekhar, Steve Lemme, Erik Stolhanske, Paul Soler and Kevin Heffernan) as well as Brian Cox, Lynda Carter and Jim Gaffigan. All return for the sequel, which also features Rob Lowe, Fred Savage, Emmanuelle Chriqui, Will Sasso and Tyler Labine. It’s set on the border of Vermont and Quebec, where a land-rights skirmish sparks an international incident.

“It’s really a border war movie and we’re an occupy ing force,” Chandrasekhar says with all seriousness. “We’re coming in and taking over Canadian land and turning it into American land. We’re kind of the villains of this movie. The Canadians the heroes.”

The five guys in Broken Lizard wrote the scripts for the original and sequel. Chandrasekhar describes their process: “We write the structure sober. We organize the three-act structure and we figure what the plot twists will be and then we’ll smoke and write jokes. We’ll put those jokes and hang them on structure of the film. I wouldn’t say we’re mostly high when we write our movies, but I’m saying it’s partially the case. When we’re trying to generate jokes, we’ll smoke a little.

“We have very specific jokes we’re trying to make,” he adds. “We write 35 drafts. The movie is incredibly specifically crafted. We’re not just throwing jokes out there.”

However, there are some questionable scenes in “Super Troopers 2” involving an exposed penis and the use of confiscated pharmaceutical drugs. This leads to a discussion about where writers and directors draw the line at what may be perceived by audiences and critics as offensive.

“We know exactly where the line is,” Chandrasekhar says. “Occasionally, we’ll take a joke right up to that line. Everybody has their own line. The Farrellys have their line. Judd Apatow has his, Todd Phillips has his and we have ours. We go up to it and that’s as far as we go. If we think of a really funny joke that’s really edgy, our instinct is to shoot it and see if we can make it work in a way that doesn’t flip the whole tone of the movie. But nothing in this movie crosses the line for me.”

Fox apparently agreed. “It’s an interesting new world,” the director says. “Because there are so many outlets now to watch movies and television, the movie companies have sort of adopted the idea that you really need to push it to make waves. At the end of the day, if we can make money for Fox Searchlight and that allows them to make more ‘Shapes of Water,’ then fine. The reality is the money from our comedy can help them make more of those movies.”

That’s certainly one way to look at it. Some recent stoner movies have done boffo box office business, including “Neighbors” ($150.2 million), “We’re the Millers” ($150.4 million) and “Pineapple Express” ($87.4 million), but most of them end up earning $15 million to $20 million with a theatrical release. The good news for “Super Troopers 2” is that sequels like “Ted 2” ($81.5 million), “Next Friday” ($57.3 million) and “Harold & Kumar Go to Guantanamo Bay” ($38.1 million) either eclipsed or equaled the originals. With the massive campaign Fox is putting into “Super Troopers 2,” it should at least surpass the $20 million mark.

“When the conglomerates bought the studios, they wanted to turn them into big profit centers,” Chandrasekhar says. “Most movies now are about super heroes. If they’re hoping a movie makes $250 million-$400 million, stoner movies are not going to do that so they’re not going to make as many of them. We had to raise the money for this movie because they were putting all their money into capes and tights. But they see there’s some commerce here. They believe they have a shot to make some reasonable money.”