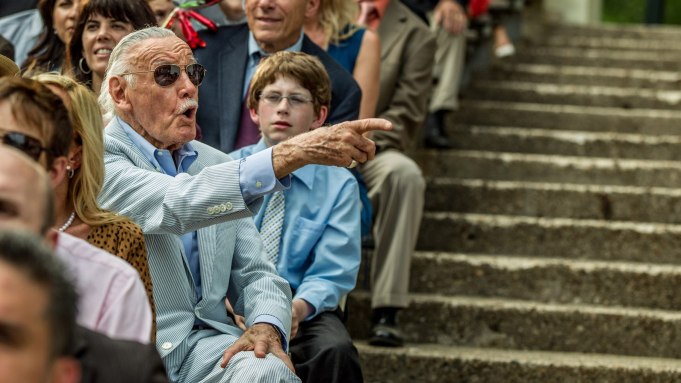 Stan Lee was a God to fans of comic books and superhero movies around the world, and many viewed Lee’s short-but-sweet cameos as the best parts of Marvel films. As a tribute to the former president and chairman of Marvel Comics, who died at age 95 on Monday, we’ve compiled a list of all his cameos in the Marvel universe.

Lee made his first cameo nearly 30 years ago in the TV movie, as a jury member in “David” Banner’s (Hulk’s alter-ego) imagined trial.

Stan Lee’s feature film cameo (unfortunately his “Blade” appearance was left on the cutting room floor) was in the premiere “X-Men” flick. Fans spotted him selling hot dogs on the beach while the recently transformed Senator Kelly emerges from the waves.

When the Green Goblin causes an explosion, Lee was the bystander who shields a young girl from debris.

Lee, who co-created the character Daredevil with artists Bill Everett, appeared in the 2003 movie adaptation. Although the film was critically panned, fans rejoiced at the sight of Lee reading a newspaper next to young Matt Murdock (played by Ben Affleck).

Performing another act of heroism, Lee once again saves a woman from falling debris, this time caused by Spider-Man’s fight with Doctor Octopus.

As Jean Grey’s telekinesis causes cars to levitate, Lee is a bewildered neighbor whose hose begins to spray upwards while he’s watering the lawn. “X-Men” writer Chris Claremont also makes a cameo appearance as the neighbor who loses his lawnmower.

As Peter Parker reads the news bulletin that his alter ego will be awarded for saving the police captain’s daughter, Lee appears next to him as a bystander to utter some wise words: “You know, I guess one person can make a difference.”

He may be dressed all dapper, but Lee is denied entry to Reed Richard’s wedding. Catch it toward the end of this video:

This cameo marks Lee’s first in the Marvel Cinematic Universe. In the film, Tony Stark mistakes Lee for Hugh Hefner at a red carpet.

Lee unsuccessfully tries to pick up Thor’s hammer with his pickup, prompting laughter from other truckers.

Lee adds comic relief to the film as a World War II general who mistakes another man for Captain America. “I thought he’d be taller,” he marvels.

“Superheroes in New York? Give me a break!” Lee says in a news interview about the Avengers. He also appears in a deleted scene, calling Steve Rogers a “moron” for not asking a waitress for her number.

Spider-Man and the Lizard wreak havoc in the library, with their fight nearly splattering Lee with a table. But the latter is utterly unbothered in the foreground, as he’s too busy jamming out to classical music on his enormous headphones.

Lee appears as a beauty pageant judge who enthusiastically gives a contestant a perfect 10.

In one of his shortest cameos, Lee is a patient at the same mental ward astrophysicist Erik Selvig stayed at.

After Rogers steals his Captain America uniform back, Lee makes a cameo as the security guard who notices its absence and believes he’ll be fired for it.

Lee is coincidentally at Parker’s graduation and remarks that he recognizes the young man.

Animated with his signature sunglasses and mustache, Lee voices Fred’s father in the post-credit scene where the two reunite.

Again with two gorgeous women flanking his side, Lee chastises Agent Coulson for making Jemma Simmons upset. He also appears as a photo on the “Agents of S.H.I.E.L.D” Slingshot” digital series.

After imbibing too much, Lee’s World War II veteran must be carried out of the Avengers’ celebration, all the while mumbling “Excelsior” to himself.

Lee has a short role in the show’s first season, borrowing a newspaper from Tony Stark’s father, Howard Stark.

Lee is a slick bartender in the scene, describing a woman as “crazy stupid fine” in Luis’ flashback.

Lee seems to go wherever the ladies are at, and appears in the bawdy film as an emcee at a strip club.

This time it’s Lee mistaking Stark’s name as a Fed-Ex worker making a delivery for who he believes is “Tony Stank.”

Bystanders quiver as nuclear missiles launch into space, including Lee, who’s clutching his real wife Joan in her last film appearance before her death the following year.

Lee reportedly filmed four cameos in one day: “Doctor Strange,” where he’s a bus rider engrossed in a book, “Guardians of the Galaxy Vol. 2,” “Spider-Man: Homecoming,” and “Thor: Ragnarok.”

Lee appeared in a “Deadpool 2” teaser that ultimately wasn’t screened in theaters, but it is available online.

Lee is dressed as an astronaut, telling celestial beings stories about his life, including from when he was a postman. This reference to Lee’s role as the Fed-Ex deliveryman caused fans to theorize that Lee plays the same character in every MCU film. Marvel head Kevin Feige confirmed this idea, saying, “We thought it would be fun to put that in there because that really says, ‘So wait a minute, he’s the same character who’s popped up in all these films.'”

In true old-man fashion, Lee yells out a window at Spider-Man for causing a commotion. “Don’t make me come down there you punk,” he taunts.

Equipped with blades instead of a right hand, Lee is the Edward Scissorhands-esque intergalactic barber who cuts Thor’s flowing tresses.

Lee makes a short guest appearance as the limo driver who takes the teens to PRIDE’s gala.

What would a Marvel blockbuster be without a cameo from Lee? In “Black Panther,” he’s billed as the “thirsty gambler” who grabs T’Challa’s winnings at a South Korea casino.

While the teens on Parker’s school bus are startled by the sight of a giant spaceship, Lee’s bus driver is unruffled. “What’s the matter with you kids — you’ve never seen a spaceship before?” he remarks.

Lee’s face graces a mural in a blink-and-you-missed-it scene when Domino lands from her parachute in her signature lucky manner.

Just as Lee is about to enter his car, it gets shrunken by a particle disk. “Well, the ’60s were fun, but now I’m paying for it,” Lee says, unfazed.

Lee’s cameos are lauded for his funny quips, but they’re often also full of insight. When Eddie Brock leaves his ex-fiancé, Lee walks by him walking his dog. “Don’t give up on her … either of you,” he instructs, hinting that he knows about Eddie’s Venom persona.

BONUS: While Lee doesn’t physically appear in these series, the icon has graced a litany of Marvel shows in poster or photo form, such as “Daredevil,” “Luke Cage,” “The Defenders,” “Jessica Jones,” “The Punisher,” and “Iron Fist” on Netflix, in addition to Freeform’s “Cloak and Dagger.”