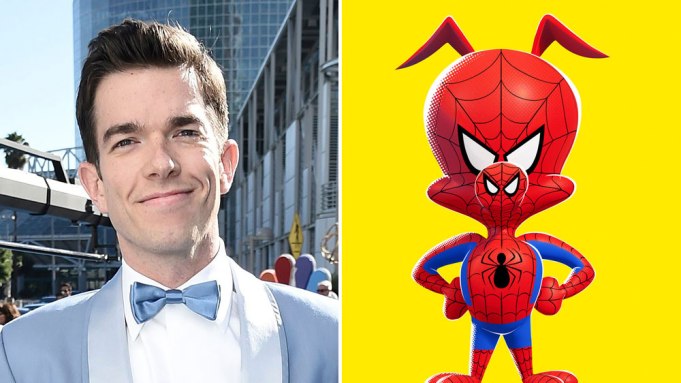 There is much to celebrate about “Spider-Man: Into the Spider-Verse”: groundbreaking inclusion, a ’90s hip-hop soundtrack, Kathryn Hahn’s neurotic villain. But the arguable breakout star of the film is Peter Porker, aka Spider-Ham, voiced by John Mulaney.

The prolific comedy writer, stand-up, and rising animation star (see “Big Mouth”) charms as one of the more oddball Spider-folk to enter the storyline of lead Miles Morales. Porker is a crime-fighting pig whose day job is as photographer for his hometown paper, the Daily Beagle.

He’s also a throwback to the classic Warner Bros. cartoon character Porky Pig (“Spider-Verse” is a Sony Pictures release, and includes a joke abut a copyright infringement lawsuit). He wafts through the air whenever a freshly baked pie is cooling and wields a wooden mallet to take on bad guys.

His unlikely popularity already has producers Amy Pascal and Avi Arad mulling over a possible standalone film. Variety caught up with Mulaney to get his pitch for that project.

“[Spider-Ham] is a fun guy who is capable of great rage,” Mulaney boasted of his cartooned character. “To go see him back at the Daily Deagle — I could see a Watergate-like story at the Beagle where he’s both a reporter and Spider-Ham by night.”

The “Oh, Hello” co-creator says he “never thought that the Clark Kents and the Peter Parkers leaned enough into the day job.” He muses, “This would be more like ‘The Post’ or ‘All The President’s Men’ or ‘Spotlight,’ but we’d make it family friendly. Lots of bacon jokes, or, ‘that’s hamfisted,'” he said.

The anthropomorphic animal made his debut in 1983, in the Tom DeFalco and Mark Armstrong comic, “Marvel Tails Starring Peter Porker, the Spectacular Spider-Ham.” The humor part comes easy to Mulaney, and he does have some comic-book cred of his own.

“I remember buying the ‘Superman Death’ series, when he died in the ’90s. I went to Moondog Comics in Chicago, which was under Tower Records, but you know that,” said Mulaney.

“I got it in a sealed thing, with the black Superman logo on it. Everyone was putting them in these cases, and I opened mine to read the book. And they were like, ‘You fool. That’s no longer sealed. You just possibly lost yourself $100,000,'” he concluded.