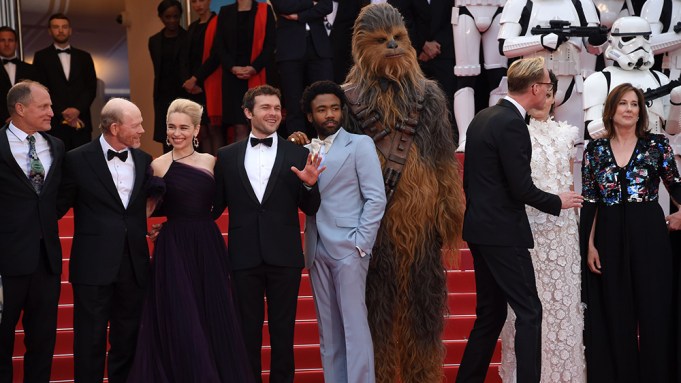 The Cannes Film Festival enforces a strict dress code, unless you’re a Wookiee warrior. Chewbacca ignored all etiquette in the South of France on Tuesday night when he appeared without a tuxedo, bowtie, or even pants alongside the cast of “Solo: A Star Wars Story” on the red carpet.

And then there were the Stormtroopers. Despite not making an appearance in “Solo,” the villains gathered in formation breezing through the lobby of the Palais, doing a loop on the red carpet and taking the stage as festival director Thierry Fremaux introduced the movie.

“Solo” centers on the early days of Han Solo, tracing his rise from a street urchin to the pilot of the Millennium Falcom. There are twists and turns, nods to franchise lore, and a roguish central performance from Ehrenreich, faced with the daunting task of inheriting Harrison Ford’s blaster.

“Solo” received a strong response at its Los Angeles premiere last week. Reactions at the after-party in Cannes were more muted, however, with some guests feeling that the humor in “Solo: A Star Wars Story” was overly broad and that the film fell a little flat. The movie played out of competition in Cannes, which means that it isn’t eligible for any awards. But there’s always a chance the jury could award Chewbacca with a special prize.

After the screening, well-heeled attendees headed up the Croisette to the Carlton Beach for an elaborate after-party complete with more Wookiees, Stormtroopers, space amoebas, and dancing spotlights — though nary a Jedi in sight. The film’s logo barely concealed a large cardboard cruise ship that was part of a promotional stunt for Sony’s “Hotel Transylvania 3.” It was the kind of splashy blowout rarely seen these days in Cannes. There were vegan-friendly food stations, foie gras, passed sushi, and rivers of champagne. Disney also put on a decibel-bursting fireworks display that lasted nearly 20 minutes.

It was a starry affair — one that brought out the film’s cast and celebrities such as “Prisoners” director Denis Villeneuve. Clarke filled a plate from the buffet, Harrelson accepted compliments from well-wishers, and Horn could be seen asking Fox Searchlight co-head Nancy Utley if she liked the film. The two executives will be corporate cousins if Disney gets government approval to buy Fox. Utley’s response to the request for her opinion was inaudible, but she had a smile on her face.