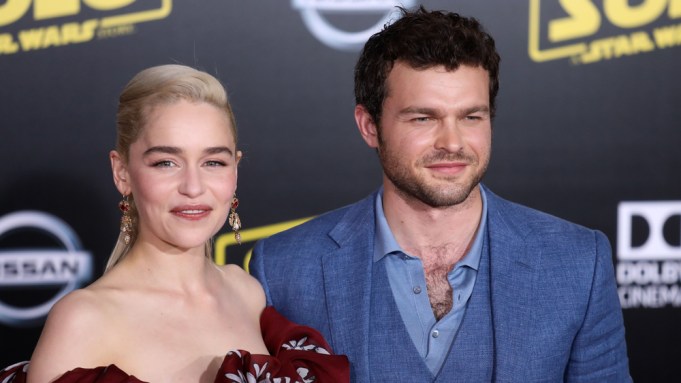 There were no (active) Jedis, but stars nonetheless showed up in full force for the world premiere of “Solo: A Star Wars Story” on Thursday night at the Dolby Theatre in Hollywood.

The second in the “Star Wars” anthology series, “Solo” is the origin story for one of the franchise’s most beloved characters, Han Solo. Portrayed in previous films by Harrison Ford, the role now belongs to Alden Ehrenreich, who said he was elated to have had the 75-year-old actor’s approval.

“It was very cool (meeting him),” Ehrenreich said on the red carpet. “I didn’t know what to expect. He was the warmest, sweetest, most supportive. It was really great to get his blessing going into doing the film.”

Ford was not hand on for the premiere, but there was plenty of nostalgia on Hollywood Boulevard. “Star Wars” veteran Mark Hamill walked the red carpet, the lone Jedi at the premiere, although his character seemed to have a final moment in “The Last Jedi.” The Millennium Falcon greeted premiere attendees who stopped for photos. Billy Dee Williams, who first portrayed notorious gambler and cape-master Lando Calrissian, walked the carpet wearing a bright red jacket.

Williams’ appearance was distracting enough that Ehrenreich interjected a red-carpet interview to say that the 81-year-old Williams was there and “looks great.”

“Solo: A Star Wars Story” takes place many years before any resistance had taken hold in the “Star Wars” universe. It’s a heist film chock-full of action as it features a series of daring escapades within a dark and criminal underworld. It shows how Solo meets and befriends his future co-pilot, Chewbacca. He also befriends Calrissian, portrayed by “Atlanta” creator and star Donald Glover.

The journey of “Solo” to the big screen was dogged with some production drama last summer when Lucasfilm president Kathleen Kennedy fired the original directors, Chris Miller and Phil Lord, over “creative differences” and brought on Ron Howard to finish directing. Miller and Lord earned an executive producing credit for the movie.

Kennedy, Allison Shearmur, and Simon Emanuel produced. Jason McGatlin served as an executive producer alongside Lord and Miller. The screenplay was penned by Lawrence and Jonathan Kasdan.

Glover described the dynamic of the central group — Solo, Calrissian, Clarke’s Kira, L3, and Chewbacca — as being motivated by the adventure. “Everybody in the group is kind of a loner in their own way, so we have a lot of trouble connecting with each other, but I think the passion for the game really is what ties us together,” Glover said.

Calrissian’s many capes might make him the most fashionable character to ever grace a “Star Wars” movie, as evidenced by Glover’s affinity for the costumes. “I had the best capes. The best outfits. There’s an outfit at the end of this film that I truly want to wear,” Glover said.

Suotamo, the Finnish ex-basketball player who plays Chewbacca, said his costume has improved over the three “Star Wars” films he’s been in. “The suit has always, in between films, improved,” he said. “I remember working on ‘Force Awakens’ and getting headaches because we had done something. Now it’s as good as it could be.”

.@JoonasSuotamo says Chewbacca's suit has improved over the past few years — but it could still use work https://t.co/RGCQdwRbHx #SoloAStarWarsStory pic.twitter.com/Zg5NkTJVk6

The worst is “your eyes are exposed to all kinds of hair disasters,” Suotamo said. “Hair going into your eye. Hair in your mouth or you get unbelievably sweaty during the course of the day. Finnish people are very accustomed to the sauna tradition so if anyone, I can take it.”

Suotamo was diplomatic when asked to compare the two Solos he’s worked with: “Harrison and Alden are two great guys,” he said. “While I was very much enjoying working with Harrision, I was equally surprised and blown away by how well Alden did his prep. And how well he decided to bring his own twist into the character.”

Writers Jonathan and Lawrence Kasdan said they were eager to work on “Solo,” having previously collaborated with Ford, who they said had a lot of input into the development of his character. “I wanted to go back and see, where did he come from,” Lawrence said about the character.

He also praised Howard’s approach to the film. “He had perfect pitch for this movie,” Lawrence said. “It was not a moment where he didn’t get what we thought was funny, what was emotional, what was dramatic, and where were the opportunities to have fun.”

“Solo: A Star Wars Story” hits theaters on May 25.