‘Solo: A Star Wars Story’ Reviews: What the Critics are Saying 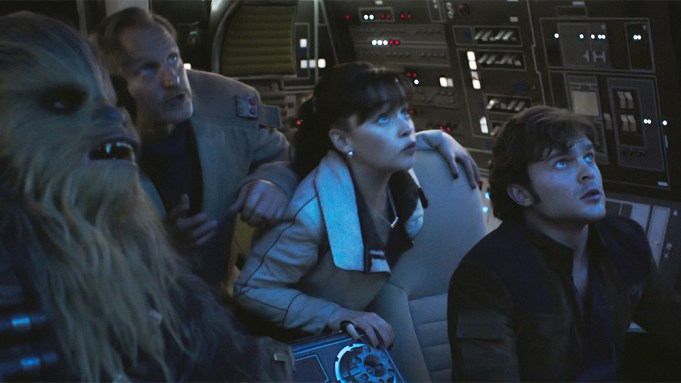 Early reviews are in for “Solo: A Star Wars Story,” the newest standalone space opera set in the galaxy far, far away, and the titular smuggler seems to have only just scraped by the wrath of his film critics with a 72% Rotten Tomatoes score, though not without a few bruises and blaster burns.

The two most recent installments, “Rogue One: A Star Wars Story” and “Star Wars: The Last Jedi,” earned 85% and 91% on Rotten Tomatoes, respectively.

The film’s notorious production history was widely publicized over the past year, the most notable event being Lucasfilm president Kathleen Kennedy replacing directors Phil Lord and Chris Miller with Ron Howard after alleged disagreements regarding the direction of the film.

Despite its infamous public troubles, Variety‘s own Andrew Barker notes, “Though burdened with a slow start and enough thirsty fan-service to power Comic-Con’s Hall H for a decade, it has a kicky, kinetic heist movie at its heart, and its action sequences are machine-tooled spectacles of the first order.” Barker further praised Alden Ehrenreich’s performance, likening it to Ford’s original interpretation, saying that “while the performance may initially come across as a highly skilled bit of mimicry, by the film’s end he’s managed to give the role a satisfying new spin.”

Here are some takeaways from other critics:

“Best of all, the movie is different. There’s no Death Star or Starkiller Base, no Imperial vessel or HQ that needs to be infiltrated in order to turn off a shield or tractor beam or interstellar tracker. There’s no mumbo jumbo about the Force, no lightsabers, no First Order, and scarcely a mention of the Empire. This is a movie set in the universe of ‘Star Wars’ that, for once, doesn’t feel it needs to be a rehash of ‘Star Wars.'”

“Disney was bound to hit a wall sooner or later. The studio has been cranking out ‘Star Wars’ movies with the rapidity of chocolates on Lucy and Ethel’s conveyor belt. Everything started out dandy, but now they’re scrambling to keep up with the demands of cranky fans, troublesome talent and truly crazy annual release dates. Four movies in less than three years is a lot of celestial battles. ‘Solo’ is the first victim of that madcap pace — a movie so un-fun you should get college credit for watching it.

“Part of the real joy of watching ‘Solo’ is seeing Ehrenreich inhabit a role made famous by Ford. The insouciant charm that typified Han in his later years is here. But unlike the bruised version we saw in The Force Awakens — where he’s been separated from his wife and alienated from his son — what we get here is a Han that is full of piss, vinegar and brash enthusiasm.”

“The movie’s reason for being is obvious — outside of Luke Skywalker and Darth Vader, whose backstories were told at length in the exhausting ‘Star Wars’ prequels, ‘Solo’ is likely the biggest character in the ‘Star Wars’ universe — but ‘Solo’ is too wobbly to stand on its own, and the story is too needlessly complex. Strip away the nostalgia, the familiar ‘Star Wars’ backdrop and take it for what it’s worth, and ‘Solo’ is a bit of a clunker.”

“To this point, all the movies released so far since Disney took over Lucasfilm have been enormous money makers, so obviously the studio won’t want to slow down. But ‘Solo’ may be the first indication that it might be time to pump the brakes and take more time to focus on the stories, and make sure everything is right (especially the creatives involved) before making a movie.”

“Virtually all of it is played for well-earned, cleverly timed surprises and mocking laughs. There are enough inside jokes and visual references to other films from the franchise to charm scholarly fans and sufficient stand-alone action to entice casual tourists to this universe. It’s clever, light entertainment that shoots ahead as if it was launched from an intergalactic slingshot.”

“‘Solo: A Star Wars Story’ keeps throwing curveballs to distract us from the fact that we know all too well where this is heading. There’s no arguing that the actors are a likable crew, even if Harrelson, Glover and Bettany are the only three who don’t play it safe. This is a Han Solo who wants to be loved even of he doesn’t want to be liked, and when he puts his arm around the immortal Chewie it’s tough not to go “aww.” But only a glimmer of the hardassed charmer that Harrison Ford immortalized finds its way into this episode. Howard and the Kasdans play the series game without ever raising the stakes, defaulting to dull and dutiful when they might have blasted off into creative anarchy.”