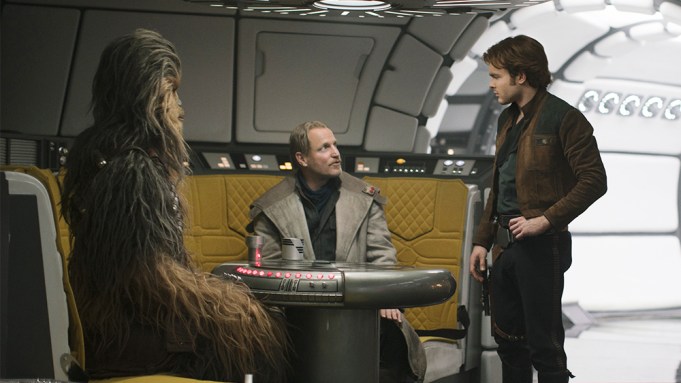 Spoiler Warning: If you have not seen “Solo: A Star Wars Story” and want to avoid spoilers, then you do NOT want to read this story. Come back to it after you see the film.

The fascinating thing about an intellectual property as sprawling as “Star Wars” is how it can build on itself via commentary on its own internal lore. That’s unique, and only possible for a brand with generations of adulation behind it.

Case in point: Han Solo shooting first. When George Lucas altered the original “Star Wars” in 1997 to depict Harrison Ford’s scruffy-looking smuggler firing on the alien Greedo in self-defense, rather than preemptively dispensing with a threat, fans lost their minds. It was an affront, the neutering of a badass.

As recently as 2015, Lucas was still defending his decision. To him, Solo was a cowboy in the John Wayne mold, therefore honorable. The hero has to let the villain have the first shot. In a mano-a-mano, Western shoot-out sense, that tracks. But while Solo may be archetypal on one hand, on the other, he is a sui generis creation that fits no mold.

The new film, directed by Ron Howard and written by Lawrence and Jonathan Kasdan, aims to set the record straight once and for all. Throughout “Solo,” the eponymous space cowboy’s mentor Tobias Beckett (played by Woody Harrelson) warns him in no uncertain terms: Trust no one.

By film’s end — and after a particularly crushing betrayal by Beckett that underscores his own advice — that wisdom has finally found root. In an unmistakable moment, Solo blasts the traitor away mid-sentence.

“It’s pretty clear, we think,” Lawrence Kasdan says. “And it was a large motivation for both of us.”

Kasdan’s son and co-writer Jonathan adds that there was no room left on the page for interpretation.

“So that the actors knew, and so everyone involved knew, it was explicitly written in the description: ‘There can be no question that Han shoots first.'”

That’s some serious re-tinkering. Fans will no doubt be delighted but what did Lucas think? He certainly didn’t make the initial alteration without giving it serious thought.

“I’m happy to report, not only did George see the movie and like it before, I walked into the premiere with him and he was in a fabulous mood and he really likes this movie,” Lawrence Kasdan says. “So I have to assume that was not some earth-shaking thing for him. Or he’s let it go.”

Adds Jonathan: “Or he feels at peace with it finally.”

Be sure to read Variety‘s cover story detailing the behind-the-scenes drama “Solo: A Star Wars Story” suffered through on the way to the screen.