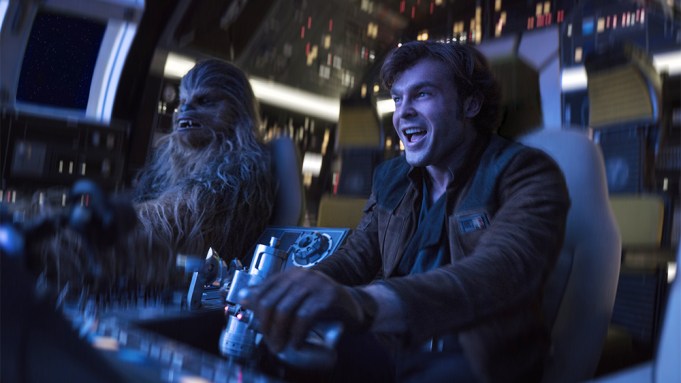 The tentpole has been forecast to lift off with $130 million to $150 million at 4,380 sites during the four-day Memorial Day weekend.

The preview number exceeds the previous $13.2 million record held by “Pirates of the Caribbean: At World’s End” in 2007. It’s slightly behind the $14.5 millions from “Thor: Ragnarok” which finished the three-day weekend with $122.7 million in November.

Ron Howard directed from a screenplay by Jonathan and Lawrence Kasdan. Howard replaced the directing team of Phil Lord and Chris Miller, who left the project in June, citing “creative differences.”

“Solo” will test whether there’s significant franchise fatigue among moviegoers as it’s opening a mere five months after Disney’s “Star Wars: The Last Jedi” debuted to $220 million in North America, and went on to earn $620 million domestically and $1.3 billion worldwide.

Disney’s “Pirates of the Caribbean: At World’s End” currently holds the title for the best Memorial Day weekend opening. It premiered in 2007 with $139.8 million.

“Solo” is the only film opening this weekend. The second frame of Ryan Reynolds’ “Deadpool 2” will slide to second place at the North American box office with $50 million to $60 million over the holiday weekend. Fox’s superhero tentpole bowed impressively last weekend with $301 million globally. It’s taken in $158 million in its first six days in North America.

Disney’s fifth weekend of “Avengers: Infinity War” should remain a draw in third place with around $20 million. The Marvel superhero vehicle has topped $603 million domestically. Paramount’s second weekend of the comedy “Book Club” is pegged for fourth with around $10 million to $12 million.

A trio of films are opening in limited release — IFC’s “Feral,” IFC’s “Mary Shelley” starring Elle Fanning, and A24’s “How to Talk to Girls at Parties.”

The 2017 Memorial Day weekend was led by Disney’s “Pirates of the Caribbean: Dead Men Tell No Tales,” which launched domestically with $78.5 million, while overall business totaled $181 million. Paul Dergarabedian, senior media analyst with comScore, noted that Memorial Day hasn’t seen a $100 million-plus launch since “X-Men: Days of Future Past” took in $110 million in 2014.

“Memorial Day weekend needs to get its groove back after a multi-year downturn that ranked last year’s frame at No. 18 all-time for the holiday and unfortunately marked the third straight year the industry did not deliver a $100 million four-day opener,” he said. “‘Solo’ looks to restore this holiday frame to its former glory and its place as one of the most important weekends of the year and the all-important summer movie season.”