‘Solo’: How Big a Box Office Dud Is the ‘Star Wars’ Spinoff? 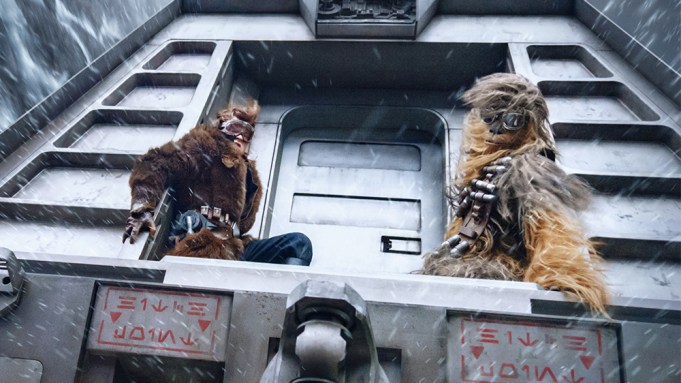 “Solo: A Star Wars Story” is a rare misstep for Disney and for one of the preeminent film franchises in Hollywood history. It’s a painful reminder that even the most successful movie series can stumble and that even cocky Han Solo isn’t immune to some humbling box office results.

The numbers don’t lie. “Solo” earned a disappointing $103 million in North America over its opening weekend and stalled out with $68.2 million overseas. At this rate, it will fall short of the $1 billion mark that each Disney-released “Star Wars” adventure has managed to fly past. The latest installment will struggle to make even half that amount globally. Analysts project “Solo” could end its run with approximately $400 million to $450 million in revenues, a dreadful result for a film that cost at least $250 million to produce and $150 million to promote.

“It’s a financial disappointment and you have to wonder, is this just a speed bump in the road for the ‘Star Wars’ brand, or is there something more here?,” said Eric Handler, an analyst at MKM Partners.

There are concerns that Disney has overdone it with the “Star Wars” sequels and spinoffs, rolling out four films since 2015 at a pace that runs the risk of inspiring franchise fatigue. However, calling the film a bomb, as some have labeled it, may be hyperbolic. After all, “Solo” is much more than a film. It’s a merchandising apparatus; one designed to move t-shirts, action figures, bedding, and even something as quotidian as plastic cups and paper plates. Disney is unlikely to be taking a write-down, even though the company will lose tens of millions on the theatrical part of “Solo’s” life-cycle. In contrast, it made a profit on the big screen runs for each of the three “Star Wars” movies it released since buying Lucasfilm, the franchise’s creator, for roughly $4 billion in 2012.

Instead, Disney will need to rely on selling television rights, moving DVDs and Blu-rays, and monetizing other forms of home entertainment distribution as it tries to salvage its investment and push the film into the black. Most studios only receive half of the box office revenues and share the other half with exhibitors. Disney is different. The studio has been able to leverage its arsenal of Marvel, Pixar, and “Star Wars” movies to extract better terms from theater chains. The company brings in roughly 60% of ticket revenue, according to sources.

It’s not unusual for a big-budget film to have to earn most of its money from ancillary revenues. Roughly half of most movies’ revenues come from its theatrical window with the rest coming from pay-TV deals, rentals, and disc and digital sales, insiders say.

But “Star Wars” isn’t a typical franchise. Its sequels and spinoffs aren’t supposed to view their theatrical runs as loss-leaders. They’re supposed to generate hefty profits from the big screen. At one point, Disney had entertained ideas of having the space opera series be another Marvel, with visions of producing at least one movie a year set in its mythical galaxy. Those lofty ambitions may have to become more grounded. At the very least, Disney is unlikely to release two “Star Wars” films in the span of five months as it did with “Solo” and “Star Wars: The Last Jedi.”

“They probably won’t be able to make a ‘Solo’ sequel, as they probably hoped they would,” Handler said. “I think it makes them a little more cautious in how they treat the canon.”

The studio may have received a bruising reality check with “Solo,” and been forced to recognize that even “Star Wars” movies can whiff at the box office. However, Disney has already fielded two $1 billion-plus grossing pictures this year with “Avengers: Infinity War” and “Black Panther,” and still has “The Incredibles 2” and “Ant-Man and the Wasp” hitting theaters in a matter of weeks. The studio is still in an enviable position.

“They can weather the storm more than any other studio because of the franchises they have that are doing amazing business,” said Jeff Bock, an analyst with Exhibitor Relations. “Out of any studio, they can take a couple hits.”