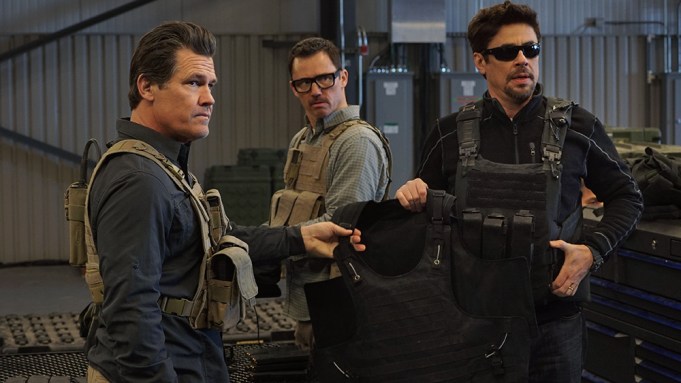 Sony’s “Sicario: Day of the Soldado” has opened with a solid $2 million at 2,669 North American locations on Thursday.

Universal’s sophomore frame of “Jurassic World: Fallen Kingdom” is expected to dominate the weekend with $60 million to $75 million. The Chris Pratt and Bryce Dallas Howard-led tentpole has pocketed $193.4 million in its first six days domestically and about $800 million worldwide.

Disney’s third weekend of “Incredibles 2” will finish in second place with $40 million to $50 million. The animated sequel has taken in a blockbuster $384 million in its first two weeks domestically.

Josh Brolin and Benicio Del Toro return in the action-drama “Sicario: Day of the Soldado” — a sequel to 2015’s “Sicario.” Box office prognosticators have predicted an opening between $10 million to $13 million at 3,055 locations. That’s on par with the original film, which debuted with $12 million and finished with $47 million domestically.

Stefano Sollima took over directing duties from Denis Villeneuve while Taylor Sheridan returned to pen the script. “Day of the Soldado” sees Del Toro and Brolin reprising their roles as a former undercover operative and CIA agent, respectively. The film is averaging a 64% fresh rating on Rotten Tomatoes. The original movie, which also starred Emily Blunt, earned an impressive 93% rating on Rotten Tomatoes and went on to score three Oscar nominations.