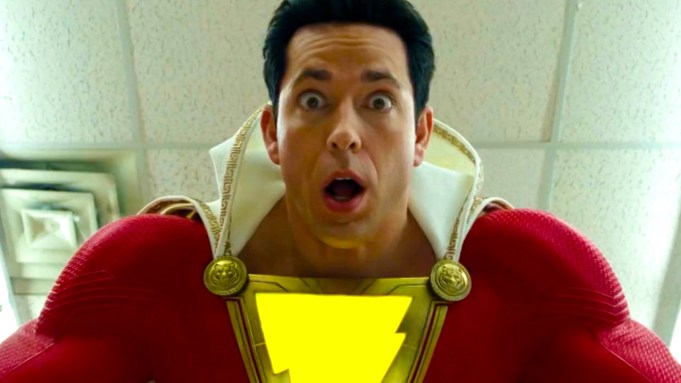 With his work as Fandral the Dashing in the latter two “Thor” movies, Zachary Levi is no stranger to superhero movies. But with “Shazam!,” it’s Levi’s chance to feel what it’s like to be the caped hero at the heart of the story.

Levi took the stage in Hall H with a Guinness in hand, which he said was given to him by “Aquaman” star Jason Momoa.

“Jason Momoa gave me this, I’m having a great time,” Levi beamed.

“Shazam!” follows Asher Angel’s character, Billy Batson, a regular teenager who is bestowed with a superpower when a powerful wizard gives him the ability to transform into a Superman-esque adult superhero with a bolt of lightning emblazoned across his chest when he shouts the word “Shazam.”

The DC superhero is trying to drum up the same excitement as Marvel’s playful “Deadpool,” which took Hall H by storm in 2015.

“Shazam!” also stars Mark Strong as the evil Dr. Thaddeus Sivana, one of Shazam’s major archenemies, a brilliant-yet-selfish scientist who seeks to use his newfound telekinetic powers to enrich and empower himself as well as Djimon Hounsou, who plays the ancient wizard also named Shazam who gives Batson his powers.

The film is directed by “Annabelle: Creation” helmer David F. Sandberg, and is set to strike theaters on April 5, 2019.