Rose McGowan on Harvey Weinstein’s Impending Arrest: ‘We Are Closer to Justice’ 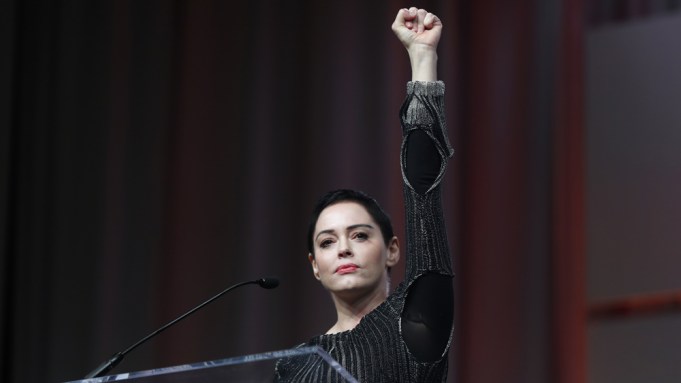 Ahead of Harvey Weinstein’s impending arrest on sexual assault charges, Rose McGowan spoke out in praise of justice finally being served.

“I, and so many of Harvey Weinstein’s survivors, had given up hope that our rapist would be held accountable by law. Twenty years ago, I swore that I would right this wrong. Today we are one step closer to justice,” she said.

Weinstein is expected to surrender to authorities on Friday in connection with a sexual assault case. The Manhattan District Attorney’s office is set to charge Weinstein with at least one case, which the New York Times and the New York Daily News reported would involve allegations that he forced Lucia Evans to perform oral sex during an audition in 2004.

McGowan continued: “We were young women who were assaulted by Weinstein and later terrorised by his vast network of complicity. I stand with my fellow survivors. May this give hope to all victims and survivors everywhere that are telling their truths.”

More than 80 women have accused Weinstein of sexual misconduct. McGowan took to Twitter last fall, claiming that Weinstein raped her, elaborating on previous statements that she had been sexually assaulted by an unnamed studio head.

1) @jeffbezos I told the head of your studio that HW raped me. Over & over I said it. He said it hadn’t been proven. I said I was the proof.

2) @jeffbezos I had already sold a script I wrote to your studio, it was in development. When I heard a Weinstein bailout was in the works

3) @Jeffbezos I forcefully begged studio head to do the right thing. I was ignored. Deal was done. Amazon won a dirty Oscar.

4) @jeffbezos I called my attorney & said I want to get my script back, but before I could, #2 @amazonstudios called to say my show was dead

5) @jeffbezos Be the change you want to see in the world. Stand with truth. #ROSEARMY #Amazon

On Thursday, Tarana Burke, the founder of the Me Too movement, said Weinstein’s intention to turn himself in on charges related to sexual assault represents a shift in the movement to change how sexual violence is handled.

“This moves from the court of public of opinion into an actual courtroom,” Burke told Variety. “That is super cathartic for a bunch of the survivors, or even survivors who are not necessarily victimized by him.”

In addition to authorities in Manhattan, the Los Angeles County District Attorney’s Office is also considering five cases against the producer, and he is under investigation by Scotland Yard in London.

“For those people for whom criminal justice is how they want to seek justice, to see it actually happen, I think is a big deal,” Burke elaborated. “We might be looking at a shift in the way cases of sexual violence are actually dealt with.”

Burke calls seeing the disgraced producer and co-founder of The Weinstein Company face charges unbelievable. “I was surprised,” she said, but adds that she is happy for victims of Weinstein, with whom she said she has been in touch.