Some Oscar campaigns are way better than others. Mind you, it’s probably just the luck of the clock that “Lady Gaga Enigma,” the highly spectacular, long-in-the-works show that opened Friday night in Las Vegas, happens to be kicking off in the heart of awards season. Gaga did blurt out toward the close of opening night that she hopes to extend her residency at the Park Theater from the currently scheduled 11 months to two to three years, at which point the words “for your consideration” will be a very distant memory. Still, if there’s an exact opposite to what happened when “Norbit” came out in the midst of Eddie Murphy’s “Dreamgirls” hopes, it has to be the sight of Lady Gaga singing and dancing her well-toned heart out, reminding 5,200 people a night that pretending to be a mousy brunette is, while a considerable skill, just one of about a thousand.

It’s a show Jackson Maine would hate, that’s for sure. (His tormented ghost will probably have a better time at Gaga’s other Vegas show, the intimately scaled “Lady Gaga Jazz & Piano,” which will be unveiled at the Park on Jan. 20.) Most of the rest of us mortals will do just fine with “Lady Gaga Enigma.” Speaking of issues of authenticity, this really is a back-to-roots move for the superstar… if you consider her roots to be the art and artifice of being spectacular, whether that’s filling a stage or dazzling with just one outlandish costume. And after all the time she’s spent establishing her bona fides as a crooner and actress, it’s a considerable pleasure to spend this much time in the shallow of fireworks, flying gyroscopes, Transformer-type marching machines, a band that can effectively incorporate industrial metal and funk, and the most spectacular unitards known to womankind.

Among the many feats of physicality in Friday’s hour-and-50-minutes show, musicality scored some points, too. She does sing live, for one thing, amid a lot of taxing choreography that would cause any other pop superstar to go right to the tape — if there are any moments where Gaga is on Memorex, they’re few and well-hidden — so it’s not as if she’s giving the middle finger to everything Ally ever learned from Jackson, or that Stefani Germanotta picked up from Tony Bennett.

But it is a prideful middle finger of a show, nonetheless. That happens literally, at a point early on in which Gaga encourages her dancers to all taunt her with an upraised digit. That moment doesn’t really make a lot of sense, to be honest, and it’s not the only thing in the putative narrative of the show that doesn’t. There is a story to it, which involves Gaga interacting with an alien-looking avatar on the big screen whose name is… Enigma. Enigma is supposed to be some kind of spirit guide and manifestation of Gaga’s innermost psyche who is going to guide her to some greater truth about herself over the course of the show. That involves a bunch of self-help bromides, as well as poor man’s sci-fi scriptwriting along the lines of: “One false move and you will be stuck in a simulation forever! Be careful, Gaga.” Trust us, Olivia Colman couldn’t do anything with this kind of dialogue, either.

It’s not always clear whether the narrative aspects of the show are meant to be taken seriously or as camp. So better to just ignore them (don’t worry, those chats with the computer animation never last for long) and give in to the pageantry. The happy revelation is that dance is the key element of the production; for all the money that’s been spent on sets and production design and things that fly and shoot sparks, “Enigma” isn’t as reliant on those things as some other Vegas shows whose stars need the overpowering distractions. Any few moments of her being in lockstep with her nine male dancers in the show’s sharp, solid choreography are worth a thousand words of script and even a verse or two.

The show opens with a “just fly” variation on “Just Dance,” as Gaga slowly drifts down from the rafters, and it’s impressive not because we don’t believe a post-Pink superstar can fly but because it affords the audience a better 360 view of a mirrorball of a glittery bodysuit and a pointy helmet that feels like something out of her more avant-garde costuming days. Plus, she’s playing keytar. Everybody loves a keytar — hell, Jackson Maine probably loves a keytar. And, upon touchdown, she and the occasionally shirtless hoofers and five band members are off to the races, rushing through some occasionally condensed versions of songs that haven’t been heard on her stage in a while, like “Dance in the Dark,” “Beautiful, Dirty, Rich,” “Aura,” “The Fame” and even “Government Hooker.” (On top of the usual JFK mention in the latter, there was an aside about Donald Trump, which wasn’t clearly audible — let’s guess it was unflattering.)

She returned to the air, later in the show, in a sort of floating gyroscope that she rocked wildly as it hovered over the ramp into the general-admission pit. At other points Gaga took to the angular landscape of fantasy mountains that provided the backdrop to the stage (and a cave for the drummer) and, during a burst of industrial rock that alternately recalled Muse or NIN, borrowed a band member’s guitar for a brief burst of modest shredding. Then she went over to the tilted, completely circular, wraparound synth setup — something Rick Wakeman might’ve thought up in his most wonderful dream — and crawled underneath and inside so she could enact some wildness on the keys as well. This occurred as “Government Hooker” gave way a short, thrashy cover of David Bowie’s “I’m Afraid of Americans,” the passing political subtext of the night.

From a production design standpoint, the night’s most photogenic element had Gaga atop what looked to be a large Transformer, or maybe one of the robot shells from “Pacific Rim,” its limbs operated by the dancers, puppet-style. It’s a visually inventive bit of business that also services to remind you: However ginormous elements of the show may get, Gaga is both figuratively and literally in the driver’s seat.

Gaga got more animated when she got out of that machine contraption and onto a piano bench for “A Million Reasons,” putting her bare leg up on the edge of the keyboard, then eventually playing it from both standing and squatting positions. As pianists go, she makes Jerry Lee Lewis’ flamboyant way with the instrument seem like a sedate Lang Lang performance by comparison. (And in her nearly all-revealing outfit, she contorts around the keys and bench in ways that would look deeply unflattering if any less physically fit performer were being seen doing them in extreme closeup on the Park Theater’s big screens.) It might all seem a bit much, but the fact that she’s able to render a musically accomplished performance in the midst of these contortions is no small musical-gymnastic feat. 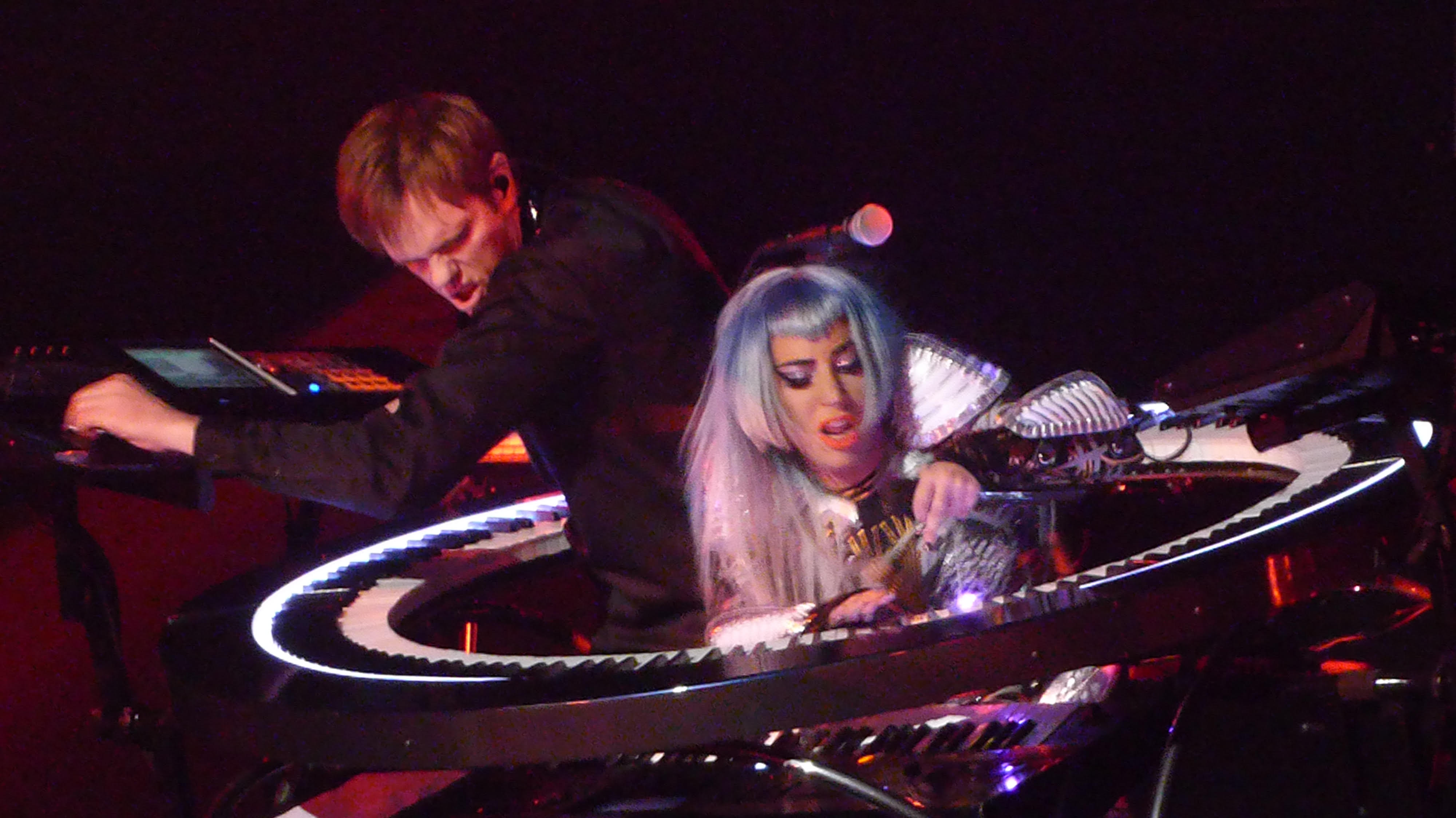 The outfit that Gaga spent the most time in, a black corset with bright green lace, gave way to vintage sci-fi pastels for a penultimate boogie of “Bad Romance” and “Born This Way.” Then, although Vegas shows don’t always bother with the encore bit, Gaga had one, disappearing into the dark and then coming back in a simple black logo T-shirt (a Lady Gaga T, because you don’t really think she’s going to wear Metallica’s on stage, do you?) to perform, obviously, “Shallow.” This year’s only absolute shoo-in of an Oscar winner was preceded by a speech about the criticism she’s lived through: “The way I dressed, the way I talked, they thought it was shallow… That shit is deep as f—.” She interrupted her performance of the ballad for an apparently tearful moment of silence. Was it a performance or an honest moment of on-stage stock-taking? For someone who’s proven herself as an actress as well as she did as Ally, maybe it doesn’t have to be just one or the other. When the chords picked up again, the song was spectacularly sung, but you probably knew that.

“Lady Gaga Enigma” is a generous show, by Vegas pop standards, not just by exceeding the standard get-‘em-out-onto-the-slot-machines set length, but because Gaga also happens to do almost two hours more of actual singing than some of her counterparts on the Strip. (No names necessary here.) If they did want to shorten it over the course of the run, we can think of a certain CG co-star who’s no match for Bradley Cooper, whose part could be cut down considerably. Watching Gaga do what she does best — even better than act, still — is all the story or connecting thread a show needs. She and “Born This Way” were both born to be in Vegas, and to raise the bar for superstar residencies just a little bit higher.