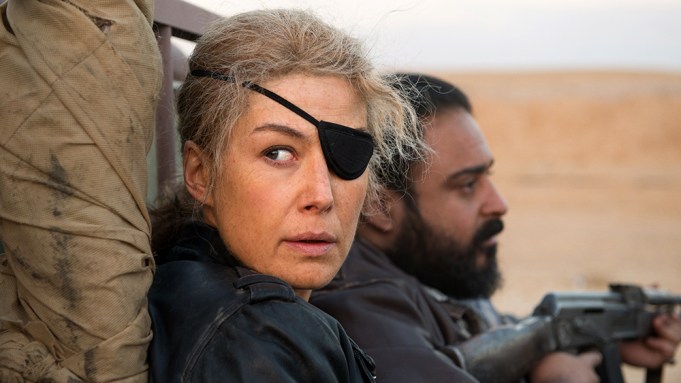 Rosamund Pike’s Marie Colvin finds herself in the middle of a hellish war in the majority of the intense first trailer for “A Private War.”

The trailer opens with Pike in a devastated combat zone, yelling, “I’m not armed.”

“A Private War” chronicles the life of the late American-born British war correspondent Marie Colvin, portrayed by Pike, and is based on Marie Brenner’s 2012 Vanity Fair article “Marie Colvin’s Private War.” Colvin died in 2012 while covering the siege of Homs in Syria.

The trailer, released on Monday, focuses on Colvin’s commitment to reporting from dangerous locations.

“I hate being in a war zone, but I also feel compelled,” Pike says. “Maybe I would have liked a normal life. Maybe I just don’t know how.”

Pike was nominated for an Academy Award for best actress for 2014’s “Gone Girl.” Heineman was up for an Oscar for best documentary for 2015’s “Cartel Land,” and won the Directors Guild’s documentary award for “Cartel Land” and “City of Ghosts.” “A Private War” marks Heineman’s first narrative feature.