‘The Predator’ to Invade Box Office With $30 Million Opening Weekend 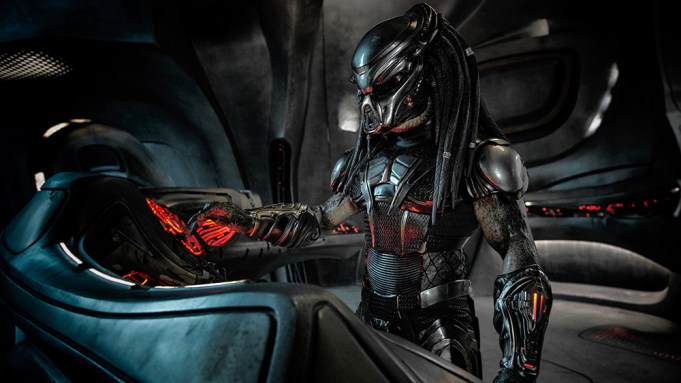 Fox’s “The Predator” should dominate the domestic box office with $25 million to $30 million in its opening weekend on Sept. 14-16, early tracking showed on Thursday.

The tracking services also showed that Lionsgate’s mystery thriller “A Simple Favor” will likely open between $12 million and $15 million that weekend, while Studio 8’s crime drama “White Boy Rick” has been pegged to launch between $5 million and $9 million with Sony handling the release. The newcomers will likely see strong competition from the second weekend of Warner Bros.’ horror entry “The Nun,” which is currently heading for a debut in the $32 million to $40 million range on Sept. 7-9.

Shane Black’s new installment of the “Predator” franchise follows the titular aliens, who return to Earth, now deadlier than ever before after taking the DNA of other species. Jacob Tremblay’s character accidentally triggers an alert that brings the Predators back to Earth.

The movie will have its world premiere at the Toronto International Film Festival. The 1987 original was directed by John McTiernan, and starred Arnold Schwarzenegger, Carl Weathers, and Jesse Ventura as commandos attempting to rescue hostages while being stalked in a jungle in Central America by a fearsome extraterrestrial, played by Kevin Peter Hall.

The original “Predator” was a solid performer, with a $12 million debut weekend and a final domestic gross of $59 million, plus $38 million overseas. “Predator 2” took in $57 million worldwide in 1990 and “Predators” earned $127 million globally in 2010.

“White Boy Rick” stars Richie Merritt as Richard Wershe Jr., who became a drug kingpin and FBI informant in the 1980s in Detroit before he was 16. Jennifer Jason Leigh, Bruce Dern, Bel Powley, Piper Laurie, and Matthew McConaughey also star. The film, produced by Studio 8, Protozoa, and LBI, will premiere at the Toronto Film Festival.

Pure Flix is releasing “Unbroken: Path to Redemption,” a faith-based “spiritual sequel” to Angelina Jolie’s 2014 drama “Unbroken,” with the title tracking in the $2 million to $6 million range for Sept. 14-16. Jolie is not involved with the pic, directed by Harold Cronk from a script by Richard Friedenberg and Ken Hixon.