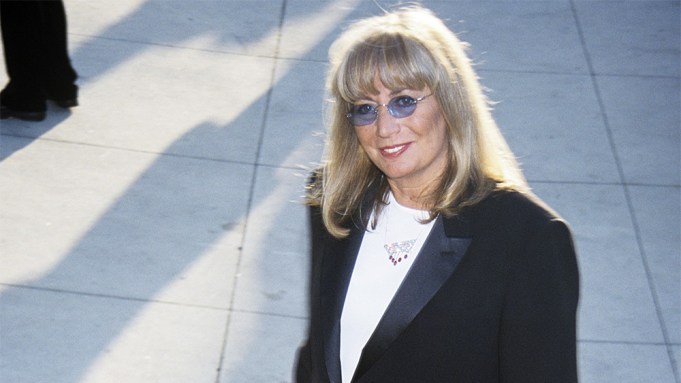 Stars across Hollywood are mourning Penny Marshall, who died Monday night at her Hollywood Hills home due to complications from diabetes, Variety has confirmed. The “Laverne & Shirley” star was 75.

Marshall first rose to fame playing Laverne DeFazio in the hit ABC series “Laverne & Shirley” before going on to become the first woman to direct a film that grossed more than $100 million and the first woman to direct two films that grossed more than $100 million. She was also only the second woman director to see her film Oscar-nominated for best picture.

Rob Reiner, her ex-husband of eight years, remembered his relationship with Marshall fondly, praising her gift for comedy and her natural funny bone. “I loved Penny. I grew up with her. She was born with a great gift. She was born with a funnybone and the instinct of how to use it. I was very lucky to have lived with her and her funnybone. I will miss her” he wrote on Twitter.

So sad about Penny.

Cindy Williams, the Shirley to Marshall’s Laverne on the classic sitcom, tweeted a fitting tribute: a photo of the “L” Marshall had emblazoned on the sweaters she wore on the show.

I Love You, Partner. pic.twitter.com/i8r6Gi9cQp

Rosie O’Donnell similarly took to Twitter to pay her respects. O’Donnell, who starred in Marshall’s 1992 film “A League of Their Own,” shared a clip of herself acting alongside the late actress in a 1996 Kmart commercial. “simply heartbroken,” she wrote at the end of the post.

Tom Hanks, who starred in Marshall’s hit comedy “Big,” remembered the times he laughed alongside the late director. “Goodbye, Penny. Man, did we laugh a lot! Wish we still could. Love you. Hanx,” he wrote. Together, the pair brought in more than $150 million worldwide with “Big,” making it the first film directed by a woman to cross $100 million. Later on, Hanks would go on to star in “A League of Their Own,” yet another successful film from Marshall about two sisters who join the first female professional baseball league.

Goodbye, Penny. Man, did we laugh a lot! Wish we still could. Love you. Hanx.

Robert De Niro also mourned the loss of Marshall, writing in a statement, “Penny will be missed.  May she Rest in Peace.” De Niro starred in Marshall’s third film “Awakenings” alongside Robin Williams, nabbing the actor an Academy Award nomination for his performance.

Geena Davis, who starred in Marshall’s 1992 film “A League of Their Own,” thanked the late director for her role in the film. “I’m terribly sad to hear the news about Penny passing. My heart goes out to Tracy Reiner and her family. Penny brought so much joy to so many and will be sorely missed. I will be forever grateful to her for letting me be a part of ‘A League of Their Own,'” she said in a statement.

Many of Marshall’s cast mates also remembered her legacy, including several members of the sitcom “Happy Days,” where Marshall’s character Laverne DeFazio was first introduced. Anson Williams, who played Potsie on the show, said in a statement, “Penny was as courageous as she was talented, and broke down the wall for women directors. Penny will be missed, but her talent and inspiration is evergreen.”

“Happy Days” matriarch Marion Ross said, “Our dear sweet Penny has gone up to see Garry. So, there will no doubt be
happier days in heaven, just as they made every day happy for us here on earth.”

Don Most, who played Ralph, said, “So sad to hear about Penny’s passing.  She was a very funny, gifted and deceptively smart woman.  There will be a lot more laughs up in heaven. RIP Penny.”

Rest in peace, Penny. Such a wonderful, funny and talented lady. Without her support and encouragement, I would not be where I am today. She will be missed. 💔 #PennyMarshall pic.twitter.com/F9ksywXYuG

Yesterday I held a Golden Gloves award from the 1930’s, given to me by Penny Marshall.
Hadn’t seen it in years.
Then today’s news…
Penny told me the story of Jim Braddock, which became the movie Cinderella Man. She was kind, she was crazy,so talented and she loved movies. RIP

RIP Penny Marshall!! Thank you for what you contributed to us girls. Grateful to have worked with you. Rest well you great Broad!!!❤❤❤ pic.twitter.com/4hk6AGjmB1

Penny Marshall brought us great laughter and truly broke new ground as a director. Neither a schlemiel, nor ever a schlimazel, she shall be missed by her many fans. Rest in peace.

Thank you, Penny Marshall. For the trails you blazed. The laughs you gave. The hearts you warmed. pic.twitter.com/7qPKJa6ApH

I grew up wanting to be as funny as Penny Marshall, and had the pleasure of meeting her a few times. Watch some old Laverne and Shirley to see why her brother Garry insisted on casting her. Comedy gold, she was. ♥️ pic.twitter.com/DhP10j7m8s

#RIPPennyMarshall She was funny & so smart. She made the transition from sitcom star to A List movie director with ease & had a major impact on both mediums. All that & always relaxed, funny & totally unpretentious. I was lucky to have known & worked with her. https://t.co/pf2kfIkCH4

Penny Marshall was one of the most important trailblazers. Her comedic talents brought success & fame, but she truly broke the mold w her directing- Big, Awakenings, A League of Their Own- becoming the first woman to direct a movie that grossed $100+ mil. 🙏 Rest in love, PM ❤️🌥

Oh Penny Marshall. 💔 Rest In Peace and thank you for everything.❤️

Penny Marshall was a loyal friend, a pioneer for women in film, and true supporter of women in the industry. Rest In Peace my friend. pic.twitter.com/UL2yAgbNUr

God Bless Penny Marshall's extraordinary soul.
Beyond doubt she was able to excel at anything she put her world class mind & heart to and, lucky us, she picked comedy and films which celebrated humans. To many of us lost ones she was, at the time, the world's greatest den mother.

Penny Marshall was a sweet woman. I was very fortunate to spend time with her. So many laughs. She had a heart of gold. Tough as nails. She could play round ball with the best of them. Always All love, D

R.I.P. Penny Marshall. So talented and funny. A big loss.

So sad to hear about Penny Marshall's death. There's lots of talks about expanding opportunities for women directors now. RIP to a woman who was waaaayyy ahead of the curve. pic.twitter.com/FTQzF9jxHA

I was invited by Penny Marshall to her house one afternoon to talk about a film she was doing. She was so kind to me. She was so smart and funny. I will never forget that afternoon. My heart goes out to her family and friends. pic.twitter.com/JGE9kB7uAF

Sad to hear of Penny Marshall’s passing. a great comedienne a terrific director and a dear friend.

.@TheSimpsons Penny Marshall our first guest star and a great talent. You will be missed! pic.twitter.com/uasxznXHIl

I always loved this picture because it was my way of emulating the great Penny Marshall. I’m sad to read she has passed. Director, producer and actress who had the humor, wit and fortitude to stand equally with the boys in Hollywood. Goodbye Penny, we will miss you. RIP pic.twitter.com/gqa9w3TEOh

Condolences to the family of Penny Marshall. She was a true treasure! 😢 pic.twitter.com/BtM46dAnYq

Had the chance to meet and sit at plenty of Laker games with ms penny marshall during my childhood years. Great woman with a great soul! RIP pic.twitter.com/6ca7TkgDBo