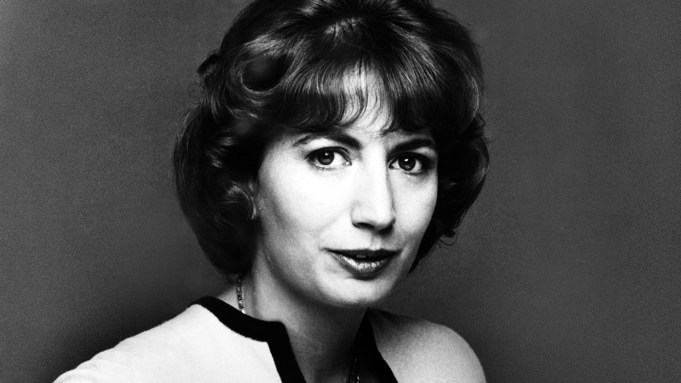 Penny Marshall, who starred alongside Cindy Williams in the hit ABC comedy “Laverne & Shirley” and then became a successful director, died on Monday night at her Hollywood Hills home due to complications from diabetes, Variety has confirmed. She was 75.

Her third film, the critically acclaimed “Awakenings,” starring Robin Williams and Robert De Niro, and based on the Oliver Sacks book, reeled in $52 million and drew three Oscar nominations — including best picture and best actor for De Niro. The movie was only the second directed by a woman that was nominated for best picture (Randa Haines’ “Children of a Lesser God” was the first, in 1986). Roger Ebert said, “Because this movie is not a tearjerker, but an intelligent examination of a bizarre human condition, it’s up to De Niro to make Leonard not an object of sympathy, but a person who helps us wonder about our own tenuous grasp on the world around us.”

“A League of Their Own,” set in the world of women’s baseball during World War II, and starring Hanks, Geena Davis, Madonna, and Rosie O’Donnell, made$132 million worldwide, including about $25 million overseas. The movie was selected in 2012 for inclusion in the National Film Registry, and it spawned a short-lived television adaptation.

Marshall’s run of extraordinary success ended with her next film, the critically derided “Renaissance Man,” which starred Danny DeVito as a reluctant instructor in the U.S. Army. The New York Times’ Janet Maslin began her review by declaring, “If you’re looking for a learning experience, ‘Renaissance Man’ is ready to teach you what the words simile, metaphor, oxymoron, and formula mean.”

She returned with some gusto with “The Preacher’s Wife,” starring Denzel Washington and Whitney Houston in a remake of a 1940s Christmas classic. The Times’ Stephen Holden was happy to declare, “The movie is a shrewdly conceived update of the 1947 comic heart-warmer ‘The Bishop’s Wife.'” After enumerating a few misgivings, he finished by saying, “All these loose ends don’t keep ‘The Preacher’s Wife’ from producing a mild feel-good glow.” The film made $48 million.

After five years, Marshall returned with her final film, 2001’s “Riding in Cars With Boys,” starring Drew Barrymore, which drew so-so reviews and about $35 million worldwide. Peter Rainer in New York magazine said, “Beverly is supposed to be a bad girl running with the wrong crowd, but most of the time she seems to be right out of a serioso episode of ‘Laverne & Shirley.'”

More recently she had directed two episodes of the ABC sitcom “According to Jim” in 2009; the 2010 TV movie “Women Without Men,” in which she also starred along with Lorraine Bracco, Dyan Cannon, and Roseanne Barr; and two episodes of Showtime’s “United States of Tara” in 2010 and 2011.

Marshall also produced a number of films, including many of her directing projects as well as Ron Howard’s “Cinderella Man,” starring Russell Crowe, and Nora Ephron’s feature adaptation of “Bewitched,” both in 2005.

But it all started, really, with “Laverne & Shirley.”

The show, which premiered in January 1976, scored in the ratings immediately. Within months of the series’ debut, Marshall and Williams were asked to record an album, “Laverne & Shirley Sing.” They sang one song from the album, a cover of the Crystals’ hit “Da Doo Ron Ron,” on a float during the Macy’s Thanksgiving Day Parade that November.

An animated series, “Laverne & Shirley in the Army,” ran in ABC’s Saturday morning lineup in 1981, with Marshall and Williams voicing the characters. After 13 episodes, an animated Fonzie (voiced by Henry Winkler) and his dog were added, and the product was wedded to the animated version of “Mork & Mindy” to create “The Mork & Mindy/Laverne & Shirley/Fonz Hour.”

The show inspired a line of tie-in merchandise, including Laverne, Shirley, Lenny, and Squiggy dolls, a board game, puzzles, and a great deal more.

Marshall and Williams also made crossover appearances — back on “Happy Days,” where they’d started; on the 1978 pilot of “Mork & Mindy” together with Winkler’s Fonzie; and on the brief Garry Marshall-created show “Blansky’s Beauties” in 1977.

Meanwhile, “Laverne & Shirley” itself evolved. The first five seasons were set in Milwaukee, with the two leads employed in a brewery; the sixth season relocated the characters to Burbank, Calif.; and then, in the eighth and final season, Williams and her husband feuded with Paramount, the producers, and Marshall when Williams became pregnant, resulting in her abrupt departure from the show, although no one agrees exactly who was to blame. Marshall and Williams did not speak to each other for several years, but eventually reconciled.

Carole Penny Marshall was born in the Bronx. Her mother taught tap dancing, while her father directed industrial films. She attended the University of New Mexico for two and a half years. While there, Marshall got pregnant at 19, and soon thereafter married the father, a football player.

Marshall made her screen debut in 1968 with small roles in Richard Rush’s “The Savage Seven” and Jerry Paris’ “How Sweet It Is!,” on which her brother Garry was a writer. She also had small roles in Paris’ 1970 film “The Grasshopper,” but she found much more work on television, guesting on series including “That Girl,” “Love, American Style,” and “The Bob Newhart Show.”

From 1972-74 she recurred on “The Odd Couple,” a show developed for TV by brother Garry, as Myrna, the schlumpy secretary employed by Jack Klugman’s Oscar Madison. (Marshall reprised the role for the 1993 reunion movie, “The Odd Couple: Together Again”).

She was a series regular on the critically acclaimed, but short-lived CBS sitcom “Paul Sand in Friends and Lovers,” in which she played Janice, who frequently mocked her brother-in-law, played by Sand, for his romantic failures.

In 1975 she guested on “Mary Tyler Moore,” but, more importantly, on “Happy Days,” where Marshall’s Laverne De Fazio and Cindy Williams’ Shirley Feeney first appeared on an episode where Fonzie chooses two girls from his little black book for a double date with Ron Howard’s Richie. (“Happy Days” was, like “The Odd Couple,” co-created by Penny’s brother Garry.) Letters to the show revealed that viewers liked the Laverne and Shirley characters, and when Garry was asked by then ABC programming exec Fred Silverman to come up with an idea for another sitcom with which to build a Tuesday night comedy block, he devised “Laverne & Shirley.”

According to Marley Brant’s book “Happier Days: Paramount Television’s Classic Sitcoms 1974-1984,” Marshall and Williams had met on the set of the film “The Christian Licorice Store” in the late 1960s. Later “the two young women were hired as writers for a bicentennial spoof of American history that Francis Ford Coppola’s company was doing. The girls liked each other and became friends.”

Despite the advice of her brother Garry, who was offering to cast her in her own show, Penny was initially reluctant to take on “Laverne & Shirley.” But she did, and Williams, deciding it would be fun to work with her friend, agreed as well.

The chant of “Schlemiel! Schlimazel! Hasenpfeffer Incorporated!” that preceded Cyndi Grecco’s theme song “Making Our Dreams Come True” in the series’ opening montage was drawn from a song Marshall and her friends used to sing on the way to school.

Garry created, produced, directed, and wrote for the series. Penny starred, and she directed a few episodes. Their sister Ronny Hallin was the casting director, and their father, Anthony Marshall, was also a producer.

The various feuds related to the show were settled over the years, and “Good Morning America” hosted a reunion of the cast in 2012.

In a Yahoo blog post, Kimberly Potts wrote, “Penny Marshall and Cindy Williams reunited (and proved they’ve still got some serious physical comedy skills) for a 2013 episode of the Nickelodeon series ‘Sam & Cat,’ in which they played the warring creators of a 1970s TV series called ‘Salmon Cat.’ ‘Sam & Cat’ stars Jennette McCurdy and Ariana Grande re-created the iconic ‘L&S’ show opening for the episode.”

Her candid autobiography “My Mother Was Nuts” was published in 2012.

Marshall was apparently diagnosed with lung and brain cancer in 2009, but then she appeared to make a complete recovery.

She was twice married, the first time to Michael Henry from 1961-63, the second time to actor-director Rob Reiner from 1971-79. Both marriages ended in divorce.

She is survived by a daughter by Henry who was adopted by Reiner, actress Tracy Reiner, and Hallin, a TV director. Garry Marshall died in 2016.