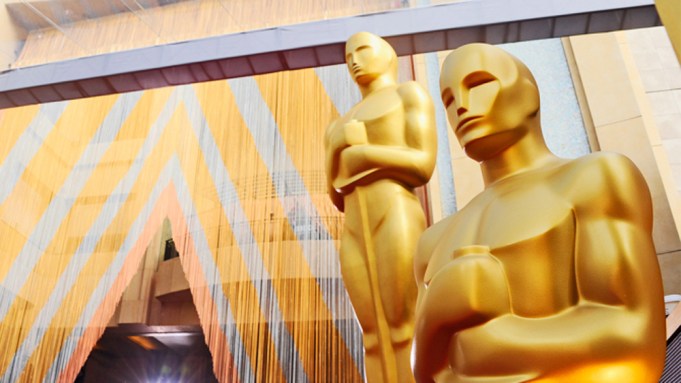 There is no other way to read the Academy of Motion Picture Arts and Sciences’ moves this morning. This is desperation.

In an attempt to address slumping ratings for the annual Oscars telecast (“only” 26.5 million people watched last year, a 20% dip from 2017, but still far ahead of the Emmys, Grammys, and Tonys), the esteemed organization made sweeping changes to the show at its monthly board of governors meeting on Tuesday night.

The program, already deemed interminable by many, will be fixed at three hours. That would be great if it meant a focus on the work, but apparently “the work” is going to be sidelined a bit, as the Academy has announced that certain awards will be handed out during commercial breaks, and those moments will be edited into a tidy package to be aired later in the telecast.

So what will fill in those lost live moments? “We are committed to producing an entertaining show in three hours, delivering a more accessible Oscars for our viewers worldwide,” Academy president John Bailey wrote in a letter to the membership this morning.

Does that mean more Disney-pandering skits like last year’s stale “Wrinkle in Time” bit (Disney-owned ABC airs the Oscars)? Probably, particularly given that it’s clear ABC had a hand in these moves. Is the ceremony going to morph into a borderline sketch/variety show that feels like a painful stretch for content? One assumes they’re still figuring all that out, but step one ought to be hiring a strong television producer to get something like that off the ground, rather than another round of film personnel. You’re making a television show. Lean on television talent.

Another key change, slightly less troubling, is the move of the 2020 Oscars up to Feb. 9. This is an attempt to maneuver the show ahead of the relentless awards circuit somewhat, and to shake off the sense that the Oscars bring up the rear every season, airing after countless organizations have weighed in on the year’s best cinema. This would put the telecast ahead of most of the industry guild award ceremonies, though still after the televised Golden Globe and Critics’ Choice awards.

It could, however, cause a problem for voters who already feel like they don’t have enough time to see all the contenders and vote accordingly. And it could also simply trigger more movement from the Oscars’ competition; the last time the Academy moved the date, from late-March to late-February, all the other shows leap-frogged to earlier dates as well.

The pièce de résistance of Bailey’s letter was the addition of a category that reveals these moves for the craven scrambling that they are. “We will create a new category for outstanding achievement in popular film,” Bailey wrote. “Eligibility requirements and other key details will be forthcoming.”

Yeah, get back to us on that, because it will be interesting to see what your inevitably arbitrary goalposts are going to be on this one. This is the worst of these ham-fisted maneuvers because it’s such a condescending stance toward “popular” cinema to take at a time when the Academy is making as many moves as possible to open the gates to all forms of cinema (i.e., waving in a thousand new members, being aggressively proactive on diversity in the voting ranks, etc.). It’s a stiff backhand to those efforts, in fact, because it outright states that popular films need to be ghettoized.

The Academy has done this before, you just didn’t quite pick up on it. “The dirty little secret about the animated feature category is they created it so popular films could pick up nominations,” one longtime Academy member told me. Now this.

It’s particularly troubling in the year of “Black Panther,” which just three days ago crossed $700 million at the domestic box office. Disney has taken the task of bringing Ryan Coogler’s critically acclaimed Marvel film into the Oscar fold quite seriously this year. A consultancy team was assembled early and that group has been laying the track ever since. Now here comes the Academy, establishing a corner to which voters can banish this and other films like it with a pat on the head and a “thanks for playing.”

Was there some internal panic that the movie might not be recognized otherwise? Is this a move to help carve out a place for it and therefore avoid a potential PR headache? Maybe. But, again, it’s a condescending move and it may have just undercut efforts to push Coogler’s film into competition with all worthy contenders, not just the ones that busted blocks. (And what an irony that would be if indeed Disney/ABC pushed for these changes.)

When contacted with a range of questions about these moves, an Academy spokesperson said a number of details had not been ironed out yet and would be revealed in the near future. The organization later issued the following statement to clarify eligibility concerns:

“While the details for a popular film category are still being finalized, a single film is eligible for an Oscar in both categories— Outstanding Achievement in Popular Film and the Academy Award for Best Picture. The new category will be introduced this coming year, at the 91st Oscars. In creating this award, the Board of Governors supports broad-based consideration of excellence in all films.”

Many of the Academy’s decisions these last few years have been met with criticism, both inside and outside the organization. But they have largely been defensible. Re-branding/identifying as a vast international group of film professionals is a good thing. Allowing more of those professionals than ever before to have a voice in the proceedings is a good thing. Drastically altering the demographic makeup of each new “class” of voting members is a good thing.

But hey, good luck with that museum.