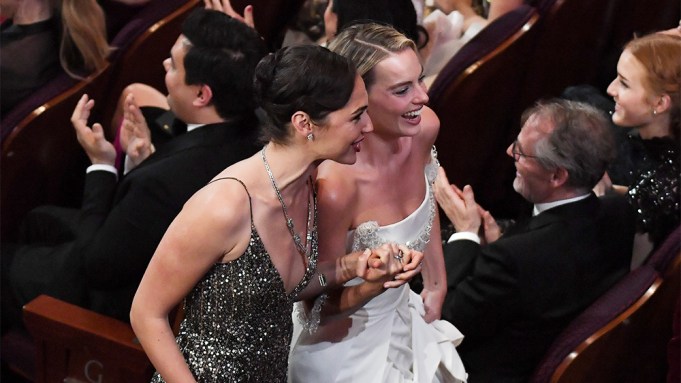 To show appreciation for moviegoers, Kimmel led a group of Hollywood A-listers to the TCL Chinese Theatre to surprise attendees during the awards ceremony. The comedian tricked the audience into thinking they were going to see a special preview of Ava DuVernay’s “A Wrinkle in Time.”

Kimmel and the group of celebrities then crashed the screening, walking into the theater with popcorn, candy, and hot dog cannons carried by Ansel Elgort and Armie Hammer. “We brought you some goodies,” Gadot told the crowd as Kimmel announced to the theater that they were on live television at the Oscars.

“This is so much better than the Oscars!” Gadot exclaimed.

The skit was similar to the memorable Oscar moment last year when Kimmel ushered a group of tourists into the Dolby Theatre to take selfies with nominees such as Ryan Gosling, Emma Stone, and Viola Davis. Denzel Washington even officiated a wedding during the skit.

“We were talking about our appreciation for people who go to the movies, and those are you people, so thank you,” Kimmel said. He also joked that the theater smelled like marijuana.

The “Jimmy Kimmel Live!” host also asked one of the shocked guests to announce the next two presenters: Tiffany Haddish and Maya Rudolph. He chuckled as the man flubbed Haddish’s name.