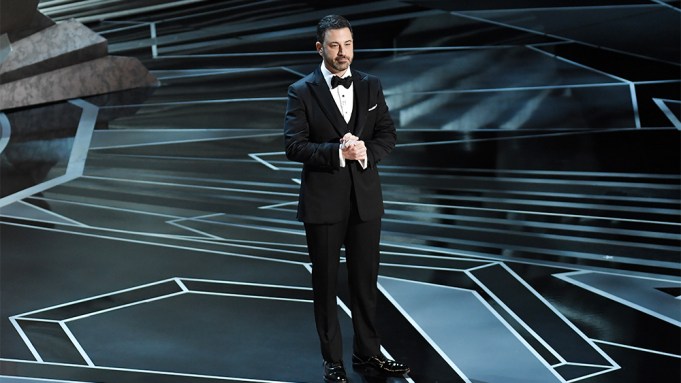 Jimmy Kimmel set the tone for the 2018 Oscars by immediately addressing last year’s infamous best picture mistake, then covering sexual harassment, the state of the movie business, and of course, Donald Trump.

Kimmel joked, “This year when you hear your name called, don’t get up right away. Just give us a minute. We don’t want another ‘thing.'”

Naturally, political jokes started flowing right away, kicking off with a jab about it being the 90th Academy Awards. “Oscar is 90 years old tonight, which means he’s probably at home right now watching Fox News.”

Kimmel then used the design of the Oscar statue to comment on the recent rash sexual harassment allegations in Hollywood. “Oscar is the most beloved and respected man in Hollywood,” Kimmel said. “And there’s a good reason why. He keeps his hands where you can see them, never says a rude word, and most importantly he has no penis at all. He is literally a statue of limitations.”

Given the multiple accusations against Harvey Weinstein, Kimmel referenced the disgraced producer and said the only other person to ever be expelled from the Academy was a character actor who shared screeners. “He got the same punishment as Harvey for giving his neighbor a copy of ‘Seabiscuit’ on VHS,” the late show host marveled.

He joked about the pay gap between men and women, using the case of Mark Wahlberg and Michelle Williams on “All the Money in the World,” as the audience applauded Wahlberg for donating his out-of-proportion $1.5 million to the Time’s Up legal defense fund.

Kimmel also referenced “Black Panther” “crushing” the box office competition and women only directing 11 percent of films. Kimmel said he could remember the time when studio executives didn’t believe a film with a minority or female lead would get support from studio executives. “The reason I remember that time is because it was March of last year,” Kimmel said.

“None other than President Trump called ‘Get Out’ the best first three-quarters of a movie this year,” Kimmel said before returning to politics while referencing the relatively low box office numbers this year’s Oscar-nominated films have generated. “We don’t make films like ‘Call Me By Your Name’ to make a lot of money,” Kimmel said. “We make them to upset Mike Pence.”

Speaking of Luca Guadagnino’s film, Kimmel addressed Timothée Chalamet’s age as the youngest actor nominated in his category in many years. “Timothée is missing ‘Paw Patrol’ to be here tonight,” Kimmel said, referring to a kids TV show, as the camera cut to a reaction shot of Chalamet laughing.

Finally, Kimmel concluded his monologue by encouraging the winners to speak about topical issues such as equal rights and the Parkland students’ March For Our Lives event. But he warned that whoever had the shortest speech would win a new jetski. The actual prize was shown by Helen Mirren in “The Price Is Right” style.

“The moment you’re handed that Oscar, that clock will start ticking,” Kimmel advised.