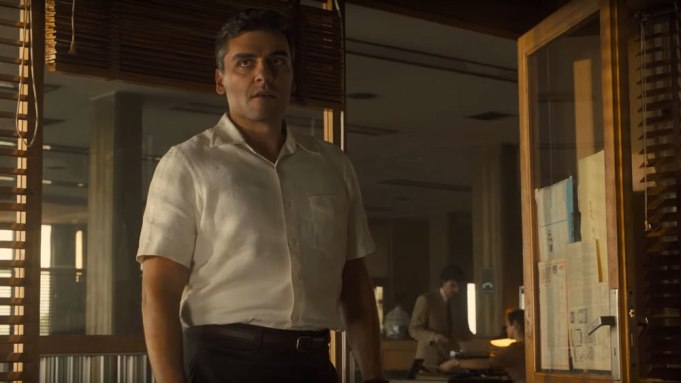 Oscar Isaac chases down one of the architects of the Holocaust in MGM’s first trailer for “Operation Finale,” the historical drama about the capture of Adolf Eichmann.

The trailer opens with Eichmann, played by Ben Kingsley, supervising the mass murder of hundreds of concentration camp prisoners, then defending his actions in a voiceover.

“You have no interest in what I have to say,” he says. “Unless it confirms what you think you already know. My job was simple: save the country I love from being destroyed. Is your job any different?”

Chris Weitz directs the drama from Matthew Orton’s screenplay about the capture of Eichmann, who organized the transport of Jews from all over Europe to concentration camps, where an estimated 6 million people were killed. When World War II was ending, Eichmann fled to his home country of Austria and then moved to Argentina. Eichmann was captured in Argentina in 1960 by the Mossad, Israel’s intelligence service, and following a trial in Israel, he was found guilty of war crimes and hanged in 1962 at the age of 56.

Isaac portrays Peter Malkin, the Mossad operative who led a group of Israeli spies searching for Eichmann in a “catch and extract” operation. He’s also producing along with Brian Kavanaugh-Jones and Fred Berger under their Automatik company and Inspire Entertainment’s Jason Spire. Matt Charman, who wrote “Bridge of Spies,” is executive producing along with Ron Schmidt.

“If you succeed, for the first time in our history, we will judge our executioner,” he’s warned at the end of the trailer. “If you fail, he escapes justice, perhaps forever. I beg of you, do not fail.”