‘Ocean’s 8’ Reviews: What the Critics Are Saying 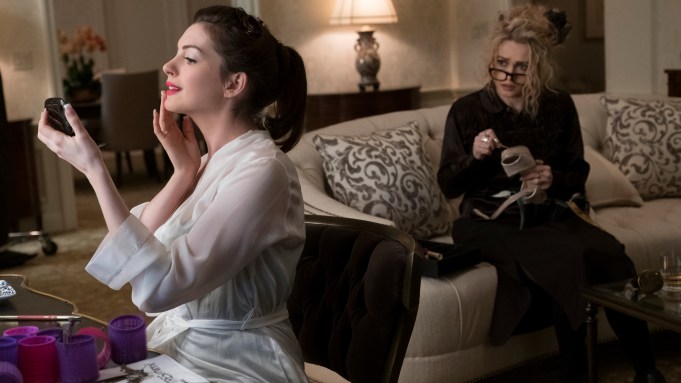 Critics are shooting out reviews for “Ocean’s 8” like dollar bills out of a jackpotted ATM machine, and the all-female spinoff caper seems to have pulled off yet another successful Ocean heist, with the film currently sitting at a comfy 78% on Rotten Tomatoes.

“Ocean’s 8” is the first film in franchise not directed by Steven Soderbergh, and is instead helmed by “The Hunger Games'” Gary Ross. As per usual, it features a star-studded cast including Sandra Bullock, Cate Blanchett, Anne Hathaway, Helena Bonham Carter, Rihanna, Mindy Kaling, and even James Corden makes an appearance.

Variety’s own Owen Gleiberman praised the gender-flipping aspect of the film, pointing out that there’s nothing inherently sneaky about men that wouldn’t have warranted an all-female cast before “Ocean’s 8.” Of Bullock’s performance as the story’s lead character, Debbie Ocean, Gleiberman wrote, “Sandra Bullock strides through this movie with the debauched insolence of a hungry criminal who has elevated thievery into an ideology. Her Debbie doesn’t just want to be rich; she wants to be spiritually sprung, under no one’s command. ‘Somewhere out there,’ Debbie tells her team, ‘there’s an 8-year-old girl dreaming of becoming a criminal. You’re doing this for her.’ ‘Ocean’s 8’ is a casually winning heist movie, no more and no less, but like countless films devoted to the exploits of cool male criminals, it lingers most — and not just for 8-year-olds — as a proudly scurrilous gallery of role models.”

“Ocean’s 8” breaks into theaters on June 8. In the meantime, check out more reviews of the film below:

“The first thing to say about ‘Ocean’s 8’ is that it takes the bad karma that clung — unfairly — to the ‘Ghostbusters’ remake and leaves it out in the trash. For here’s a gender-flipped sequel that not only works just fine, but renders the whole ‘novelty’ of the concept a borderline irrelevance. A crew of women teaming up to boldly go where so many male-dominated heist teams, from ‘Rififi’ to ‘The Italian Job’ to the ‘Ocean’s’ films, from ‘The Asphalt Jungle’ to ‘The Town’ to ‘Logan Lucky,’ have gone before? Unless you believe that men possess some innate talent for sneakiness that women don’t, what could be more overdue? In ‘Ocean’s 8,’ Debbie and her team come together and devise their jigsaw puzzle of a heist with an aplomb that feels as natural as it is crowd-pleasing.“

“In the end, Ross connects the dots of the robbery with a functional competence that can’t compare with the high style director Steven Soderbergh lavished on the male ‘Ocean’s’ films. It’s the ladies who carry this caper flick over its rough spots. ‘Somewhere out there,’ Debbie tells her cohorts, ‘there’s an eight-year-old girl dreaming of becoming a criminal. You’re doing this for her.’ They’re doing it for us, too. What dude wouldn’t want to enjoy the company of eight actresses who make a zirconium plot sparkle likes diamonds. In summing up her strategy – and not coincidentally Hollywood’s archaic attitude toward female buddy movies (look what happened to the Ghostbusters reboot) – Debbie points out that ‘a him gets noticed and a her gets ignored.’ Not this time, sister. You can take ‘Ocean’s 8’ to the bank.”

“The sheer brazenness of the crime in ‘Ocean’s 8’ is enough to put a goofy smile on your face. But as is always the case in heist movies, the sustained thrill of the high-wire act comes from watching the players lay out their complex plan, then seeing whether it actually goes as smoothly as they’d hoped. Ross and co-writer Olivia Milch give each of these ladies an opportunity to shine along the way, but because they’ve amassed such a staggering lineup of talent, it makes you wish some of the supporting players had been better fleshed out. This is particularly the case with Kaling, Paulson and Awkwafina, and it’s the movie’s one real weakness. But it makes a real statement to revisit an established franchise like the “Ocean’s” movies—which were ruled by roguish men—and place a murderer’s row of gifted actresses in the key roles.”

“In that gap between execution and inspiration, you notice things you shouldn’t: The heaviness of the make-up on certain members of the cast, the missed opportunities in the script (Bullock’s Debbie has a crucial check-list for the robbery she’s been carrying around since prison, but we never get to see it), the way the movie rests on the actors’ established personas (Hathaway excepted) rather than letting them surprise us with idiosyncrasy. The way Bullock’s Debbie is the boss of the job but Blanchett is the Boss of This Movie. I don’t want to sound too harsh — the movie’s a two-and-three-quarters-star affair if ever there were one — but everyone here is pulling her weight except the man behind the camera. We go to heist films to see the suckers get taken in high style. This one just robs us bland.”

“If Ross is going to go to great lengths to avoid constant nods to his franchise’s past — this is what doomed the female Ghostbusters reboot a few summers ago, if you recall — then why introduce so many new characters in the home stretch? We’ve come to see the stars! Let them woo us, and let Cartier worry about the stolen necklace. Insurance is not our problem. Bullock is semi-retired at this point. Take advantage. Please. The whole thing doesn’t add up to much. The Ocean’s movies have always favored style over substance, and this installment makes an especially quick mental getaway. That’s the ideal tonic as the temperature starts to rise. Still, if this mighty cast is going to get all dressed up, they should have somewhere a bit more special to go.”

“‘Ocean’s 8’ is exactly what it promises to be. It’s a snazzy, story-thin, character-rich heist caper centered on a bunch of professional thieves (or potential criminals recruited into the game) who just happen to be women and who just happen to be played by a cast of delightful actresses. While it is technically a sequel/spin-off to the ‘Ocean’s 11’ trilogy (itself spawned from the 1960 Rat Pack caper), it is less an IP cash-in than a case of using the brand to give some breathing room to what is otherwise an original all-female heist flick. It’s not a great movie, but it is great fun.”

“Love this cast. They make for a nifty team, and their timing is impeccable. If only they had to face a more daunting challenge. One of the problems with ‘Ocean’s 8’ is there isn’t a formidable, hiss-worthy villain a la Andy Garcia’s casino owner in ‘Oceans 11.’ (The ex-boyfriend character, played by Richard Armitage, is a dopey and vain fop, easily dismissed and never a real threat.)”

“Bullock plays a more hardened character than usual, but Debbie’s vulnerability (and the actress’ natural appeal) still peers through. Blanchett, with her long, straight blonde hair and black and animal-print ensembles, is the definition of cool style, but a star of her caliber should have been given more to do. Kaling and Paulson are also underused, but Rihanna (a fashion icon in real life) and Awkwafina lend extra mischief and attitude to the octet. The standout of the cast is frequent social-media target Hathaway, good-naturedly sending up the public’s perception of her by playing a star who’s a little too fixated on her image. Studying herself in the mirror, hungry for compliments, condescending to her assistants, Daphne is a witty portrait of Hollywood egomania that should handily defuse any future Hathaway jibes.”

“‘Ocean’s 8’ plays by all the familiar beats of an Ocean’s movie, and you can just kind of wrap yourself in it like a warm, soft blanket. Director Gary Ross doesn’t quite have Steven Soderbergh’s stylistic flourishes, but he knows how to keep the pacing on track and to trust his actors to be cool, calm, and collected. It may not be Soderbergh’s level of ‘Ocean’s,’ but it’s not so off brand that you’ll mind a different director behind the helm (although if they do a sequel, and they totally should, I’d love to see a woman directing the next installment). There’s something just a bit jazzier and a bit more freeflowing about Soderbergh’s movies whereas Ross is about getting down to business.”