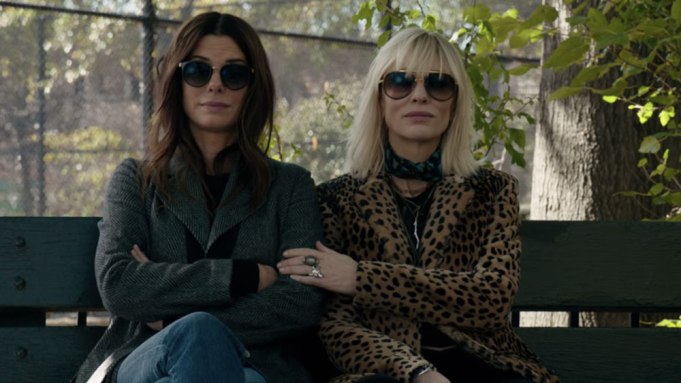 Audiences got a second look at “Ocean’s 8” on Thursday, when Warner Bros. released a new trailer for the female-led heist comedy.

Mindy Kaling and Sarah Paulson, two of the film’s stars, teased the new footage on their Twitter accounts on Wednesday, with Kaling introducing her jewelry-maker character Amita and writing “no heist movie is complete without diamonds.”

No heist movie is complete without diamonds 👋🏾 say hi to your new girl Amita #Oceans8 pic.twitter.com/FAMWrzGiUI

The new footage shows the eight women planning a major robbery at the Met Gala.

When Kaling’s character asks Sandra Bullock’s Debbie Ocean how long it took to plan the elaborate scheme, she says “Five years, eight months, and 12 days” — aka the length of her prison stint.

The first trailer was released in December, showing Bullock as Debbie Ocean, the estranged sister of Danny Ocean (played by George Clooney in the previous three “Ocean’s” films). This movie centers on Debbie’s attempt to pull off the heist of the century at New York City’s annual Met Gala. The star-studded cast is also comprised of Cate Blanchett, Helena Bonham Carter, Anne Hathaway, Rihanna, Paulson, Kaling, and Awkwafina.

The movie — directed by Gary Ross, written by Ross and Olivia Milch, and produced by Clooney and Steven Soderbergh — is both a sequel and spinoff of the “Ocean’s” trilogy. It hits theaters on June 8.