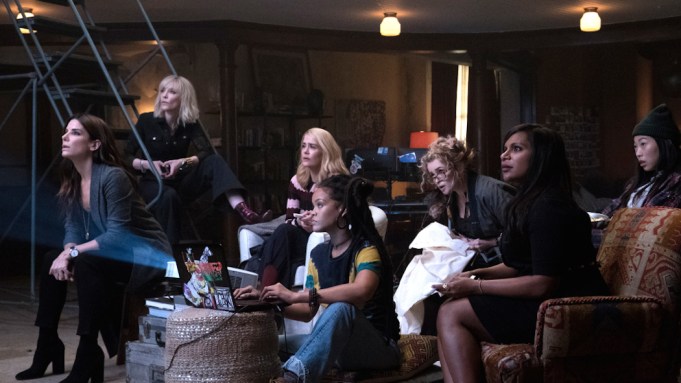 “Ocean’s 8” is dominating domestic moviegoing as the heist comedy heads for a solid opening weekend of about $44 million at 4,145 sites, early estimates showed on Friday.

Warner Bros.’ gender-swapped reboot of the “Ocean’s” franchise was performing above forecasts as it grabbed an impressive $4 million from Thursday night previews, part of a Friday total of about $17 million. Recent predictions had placed “Ocean’s 8” between $33 million and $40 million.

A24’s horror movie “Hereditary” also came in above predictions with a $14 million launch — leaving it in a battle for second with the third weekend of “Solo: A Star Wars Story” and the fourth frame of “Deadpool 2.”

Global Road’s dystopian crime-thriller “Hotel Artemis” was showing little traction with a debut in the $3 million range at 2,047 venues.

Gary Ross directs from a script he wrote with Olivia Milch. Steven Soderbergh, who helmed the three previous “Ocean’s” movies, produces with Susan Ekins. The film, which carries a $70 million price tag, have earned mostly positive reviews, racking up a 68% score on Rotten Tomatoes.

Should estimates hold, “Ocean’s 8” will finish with the best opening among the five films in the franchise, starting with the original “Ocean’s 11” in 1960, followed by the remake “Ocean’s Eleven” in 2001, “Ocean’s Twelve” in 2004, and “Ocean’s Thirteen” in 2007 — all with Clooney, Brad Pitt, Matt Damon, Andy Garcia, and Don Cheadle. Each bowed between $36 million and $39 million in their domestic openings. In total, the trilogy collected over $1.2 billion worldwide.

The third weekend of Disney’s “Solo: A Star Wars Story” and the fourth frame of Fox’s “Deadpool” are set to battle for second with “Hereditary,” with “Solo” pegged for about $13.5 million and “Deadpool” at around $13 million. “Solo” has taken in $158 million in its first 13 days domestically and “Deadpool 2” has totaled $262.8 million in 20 days.

“Hereditary” had been pegged to open in the $5 million to $9 million range, but its $1.4 million preview total showed more traction for the Toni Collette vehicle. Reviews have been stellar, giving the film a 94% ranking on Rotten Tomatoes. Alex Wolff, Milly Shapiro, Ann Dowd, and Gabriel Byrne also star in the story of a family that begins to unveil secrets about their ancestry following the death of their grandmother. “Hereditary” has a $10 million budget and is arriving with significant buzz, noted Paul Dergarabedian, senior media analyst with comScore.

“A24’s much-talked about and much-feared horror film ‘Hereditary’ has a trailer that’s already inspired nightmares — and also talk of the film becoming an instant classic for the scariest (and often most profitable) movie genre,” he said.

“Hotel Artemis” had been forecast to debut with at least $5 million, but is unlikely to do so. The noirish title stars Jodie Foster and Sterling K. Brown in a near-future action-thriller set at a secret hospital for criminals in Los Angeles. Drew Pearce, who wrote “Iron Man 3” and “Mission: Impossible — Rogue Nation,” is making his directorial debut. Reviews have been mixed.

“Ocean’s 8” is opening on the same weekend as Tom Cruise’s “The Mummy” did a year ago, when the reboot finished in second with $31.7 million — far behind the sophomore frame of Warner’s blockbuster “Wonder Woman,” which took in $58 million.