There Are No Rules in ‘Sicario: Day of the Soldado’ Trailer 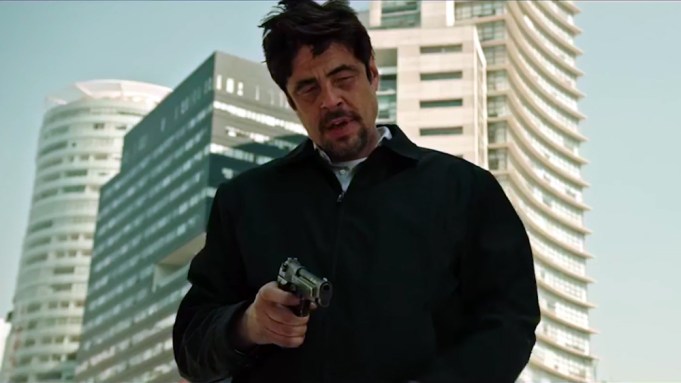 The drug war gets a lot more out of control in Sony’s new trailer for “Sicario: Day of the Soldado” with Benicio Del Toro returning as undercover operative Alejandro Gillick and Josh Brolin back as CIA agent Matt Graver

Early in the bleak trailer, Del Toro’s character — whose family was murdered by a cartel kingpin — guns down a cartel operative in broad daylight on a street after pulling off his mask and saying “Adios” to the victim.

The pair, who starred with Emily Blunt in 2015’s “Sicario,” finds themselves back in the middle of the violent war against drugs along the United States-Mexico border. With the drug cartels now smuggling terrorists across the U.S. border, they decide to pit the cartels against each other.

“You want to see this thing through? I’m going to have to get …. dirty,” Brolin tells a roomful of government officials.

Brolin’s character tells Del Toro’s that he’s going to start a war. Asked “Against who,” he replies, “Everyone. No rules this time.”

The trailer includes choppers swooping through the desert, plenty of gunfire, and multiple vehicle explosions, including one that appears to be from a guided missile. At one point, Brolin tells a colleague on a phone call, eliciting the response “Luck doesn’t live on this side of the border.”

“Sicario” was released by Lionsgate and grossed $84.9 million worldwide. Lionsgate and production company Black Label Media agreed in April to have Sony Pictures release the sequel domestically, with Lionsgate retaining the international rights.

“Sicario: Day of the Soldado” opens on June 29.