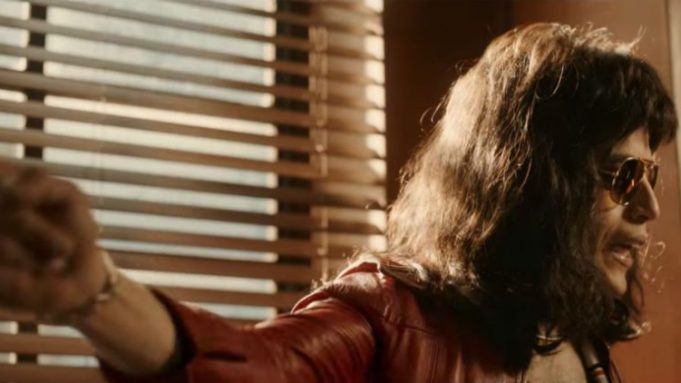 If further proof were needed that Rami Malek is an ideal actor to portray legendary Queen singer Freddie Mercury, the second trailer from “Bohemian Rhapsody,” the forthcoming biopic of the singer and the classic band he fronted, nails it.

Not only does he have Mercury’s stage moves down — from the aggressive glam of the band’s early days to the butch fist-pumping of his ‘80s incarnation — he’s got his drop-dead humor as well. In one scene, the actor portraying drummer Roger Taylor is about to throw a bottle. “Roger, there’s only room in this band for one hysterical Queen,” Malek deadpans.

The trailer pivots back and forth between scenes from the band’s early days and its superstardom. And like many recent biopics, it gets period details perfect — clothing, hairstyles, incidental objects in a scene — while taking traditional biopic liberties with reality. “You’re a legend, Freddie,” one bandmember says. “We’re all legends,” Malek replies. Throughout the clip, we see the band recording classics like “We Will Rock You” and, of course, the film’s title song. “How many more galileos do you want?” Taylor yells.

We also get hints of Mercury’s sex life — first his girlfriend and confidante Mary Austin, then later male lovers in several unspecific but emotionally loaded moments — leading up to the inevitable conclusion, which we have not yet seen depicted in the film, of the singer’s AIDS-related death in 1991.

How that will be handled remains to be seen, but to this nearly lifelong Queen fan, so far the film looks awesome. (Watch the first trailer here.)