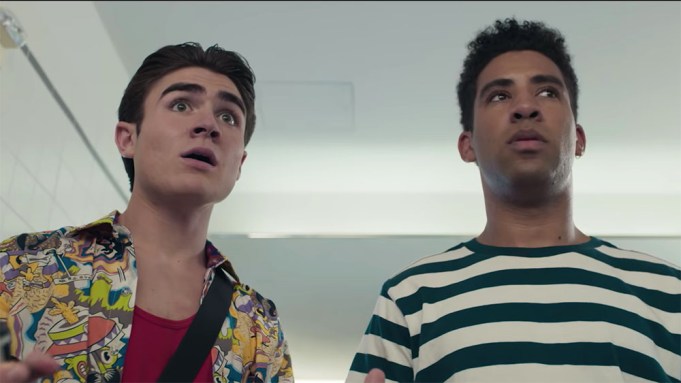 Netflix is getting the party started.

In a new trailer for “The After Party,” real-life rapper Kyle, known for last summer’s hit song “iSpy,” vies for his big break with a record deal all before the sun rises.

The film, written and directed by Ian Edelman (“How To Make It in America”), follows Kyle’s character Owen as he accidentally becomes a viral sensation — but not for his beats.

After Wiz Khalifa (as himself) gives the aspiring artist advice and some low-grade weed, Owen has a bad reaction and begins to seize on-stage during a set. As is par for the course in the digital age, audience members take video of the incident and Owen becomes #Seezjahboy overnight.

“The After Party” — which features cameos from rappers French Montana, Pusha-T, Jadakiss, and Desiigner — culminates with grand soiree that Owen and his buddy/manager Jeff (Harrison Holzer) try crashing to jumpstart his career as a rapper, rather than being known for a mishap.

DJ Khaled also appears to lighten the mood, telling Jeff, “Boy, you gotta chill man” when he jumps at the chance to meet the producer. The film also stars Shelley Hennig and Teyana Taylor.

“The After Party” premieres Aug. 24 on Netflix. Watch the trailer above.