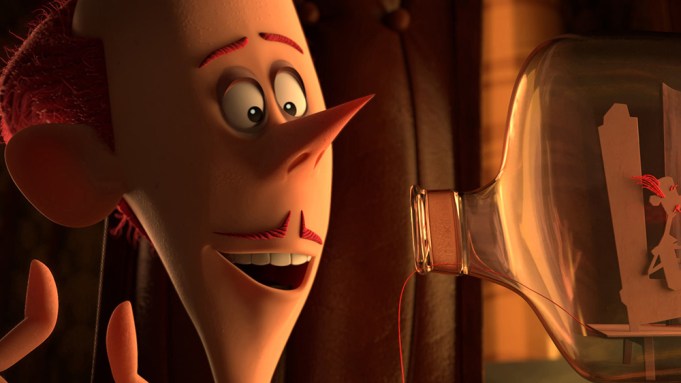 The offerings span film and television, and spring from the minds of some of the most acclaimed names in media. The movies include “My Father’s Dragon,” a 2D animated family feature film from Oscar-nominated director Nora Twomey (“T​he Secret of Kells”), and “The Willoughbys,” an adaptation from the Lois Lowry novel of the same name by writer and director Kris Pearn (​”Cloudy With A Chance of Meatballs 2″)​. “The Willoughbys” is already in production and boasts a voice cast that includes Ricky Gervais, Maya Rudolph, Will Forte, Martin Short, Alessia Cara, and Jane Krakowski. “My Father’s Dragon,” has a script from “Inside Out’s” Meg LeFauve.

On the television front, Netflix has greenlit three shows. The streaming service has enlisted “The Powerpuff Girls” creator Craig McCracken to do a new series about a young boy who is transformed into a super-powered hero after he encounters some cosmic stones. It’s not your typical wish fulfillment story, McCracken told Variety. The show will follow its protagonist as he struggles to harness his newfound abilities.

“It’s the story of how the reality of having these powers doesn’t live up to his fantasy,” said McCracken. “I always felt that the best part of superhero stories is when you watch them when they’re trying to figure out their powers, not after they become awesome at it. That’s when they’re at their funniest and most relatable.”

Other shows include “Trash Truck,” the story of a 6-year old boy’s friendship with a trash truck, and “Go! Go! Cory Carson,” a show based on the hit Go! Go! Smart Wheels toyline. Both shows are geared towards preschoolers.

Netflix will back a limited series from Jorge Gutierrez (“Book of Life”) entitled “Maya and the Three.” Although limited series have become more popular on network and cable channels, it is rare to see the format applied to animated entertainment. In an interview with Variety, Gutierrez said he wanted to make a show that was like “a Mexican ‘Lord of the Rings,’ but hilarious.” He added that the series boasts a female hero, who is half human and half divine, and said the project will draw heavily on Mesoamerican legends.

“I realized that too much of mythology is sexist,” said Gutierrez. “This is my attempt to provide an awesome female hero and put her on this amazing quest.”

At one point, Gutierrez had wanted to direct every installment of the nine episode series, but he will settle for calling the shots on four shows, while co-writing the rest of the episodes.

The announcements continue Netflix’s big push into original animated programming, a move it is making as Disney prepares to launch its own streaming service in 2019. Netflix is applying a creator-driven approach to its slate and has asked the creative community for its best ideas. Melissa Cobb, a former Dreamworks Animation executive, has been overseeing the effort since she was hired to run the kids and family team in 2017.

“We’re trying to take the Netflix philosophy of empowering creators and bring that into the animation space,” said Cobb. “We’re not focused on creating a singular brand identity. We want to produce a broad range of content that appeals to kids and families all over the world.”

The studio has already announced several ambitious projects. They include Guillermo del Toro’s stop motion “Pinocchio,” as well as “Over the Moon,” an animated fantasy film from “The Little Mermaid” director Glen Keane. On Monday, Variety broke the news that Netflix will produce “Jacob and the Sea Beast,” a fantasy adventure from Chris Williams, the co-director of the Disney films “Moana,” “Big Hero 6,” and “Bolt.”

Head over here for a deeper dive into Netflix’s plans for the space and exclusive interviews with Cobb and other Netflix creators.

Here’s a complete list of the titles being unveiled, as well as their release dates and official descriptions:

An animated limited series created, written, and directed by Jorge Gutierrez (​The Book of Life, El Tigre)​ . Set in a mythical Mesoamerican inspired world, a warrior princess embarks on a quest to recruit three legendary fighters to help save the world of men and gods. Silvia Olivas (“Elena of Avalor”)​ is co-writer and co-executive producer, and Jeff Ranjo (“M​oana​”) is head of story.

A 2D animated family feature film from director Nora Twomey (“T​he Secret of Kells​,” “The Breadwinner​”) and written by Meg LeFauve (“I​snide Out​,”​ “The Good Dinosaur”)​, with story by LeFauve and John Morgan, who are also executive producers. Bonnie Curtis and Julie Lynn of Mockingbird Pictures are producing together with Paul Young of Cartoon Saloon and Tomm Moore. Based on the Newbery Honored children’s novels by Ruth Stiles Gannett, ​”My Father’s Dragon” tells the story of young run-away Elmer Elevator, who searches for a captive Dragon on Wild Island and finds much more than he could ever have anticipated. Alan Moloney and Ruth Coady of Parallel Films will also serve as executive producers alongside Gerry Shirren.

Animated series in production from Craig McCracken (“T​he Powerpuff Girls,”​ “Fosters Home for Imaginary Friends”)​. The show centers on a young boy who dreams of becoming a hero, and when he stumbles across some cosmic stones of power his dreams appear to have come true! Unfortunately the reality of being a hero vs. the fantasy of being a hero are completely different and this challenge becomes the biggest battle he has to face. The kid may be the good guy, but he’s really bad at it!

Animated series in production from Max Keane (“D​ear Basketball”)​. Hank is a free-range, dirt-covered 6 year old boy with a big imagination and an even bigger best pal… a giant honking, snorting trash truck. From learning to fly to going to the dentist, there is no adventure too big or too small for these two best friends. Glen Keane (​”The Little Mermaid​,” “​Aladdin,​” “Beauty and the Beast​”) and Gennie Rim (“D​ear Basketball​”) serve as executive producers alongside Max Keane.

A highly stylized CG animated feature film currently in production with BRON Animation in Vancouver from writer/director Kris Pearn (​”Cloudy With A Chance of Meatballs 2″)​ . When the four Willoughby children are abandoned by their selfish parents, they must learn how to adapt their old-fashioned values to the contemporary world in order to create a new and modern family. Based on the book by Newbery Award-winning author, Lois Lowry. Starring Ricky Gervais, Maya Rudolph, Will Forte, Martin Short, Alessia Cara and Jane Krakowski.