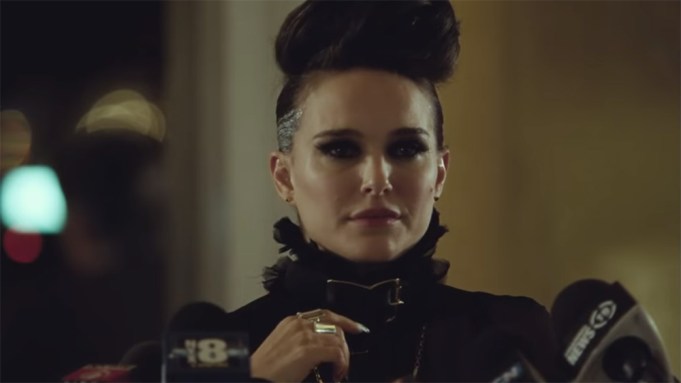 Natalie Portman is fierce and vulnerable in the new trailer for “Vox Lux,” in which she plays Celeste, a 21st Century pop mega-star grappling with a tragic past.

Written and directed by Brady Corbet, the film examines the toll fame takes on a life lived under the spotlight, seeking to unpack the cult of celebrity in modern America. Featuring original songs by Sia and a score by Scott Walker, Portman struts her stuff as a sold-out-stadium performer alongside Jude Law and Stacy Martin, who play the star’s talent manager and songwriting sister respectively, the force and fuel behind Celeste’s rise to fame.

Spanning from 1999 to 2017, the film chronicles Celeste’s rocket to stardom and ultimate American-icon-status after singing a song at a memorial service as a teenager awakens her desire to perform. The title “Vox Lux” comes from the pop star’s comeback album, which she goes on tour to promote after a controversial incident nearly derails her career. As Celeste struggles to regain her footing in the public eye, she must also navigate motherhood and stave off the madness that threatens to follow monolithic fame.

Production and distribution company Neon will release “Vox Lux” in New York and Los Angeles on Dec. 7, with its wide theatrical release coming Dec. 14. Watch the trailer above.