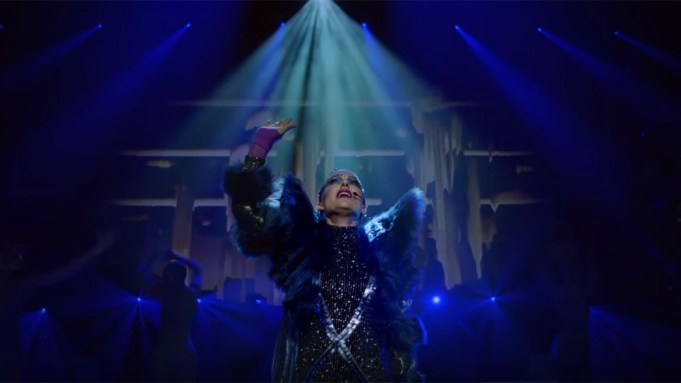 “Tonight, we’re gonna bring it back to where it all began,” Natalie Portman says at the beginning of the latest trailer for Brady Corbet’s “Vox Lux.”

The trailer abruptly cuts to a young girl — introduced as Celeste Montgomery, a young version of Portman’s character — singing at a vigil held for a slain student.

After a few shots of Celeste dancing and receiving a brain scan, the song is taken up by the present-day version of her, on stage and singing to thousands of people in a glitzy, feathered costume.

“I keep feeling like big moments get stolen away from me,” a tearful Portman says as the trailer gives flashes of her life as her career is on the rise.

“You know, sometimes you just get kicked while you’re down,” she continues.

The film follows Celeste, who becomes a pop star after she and her sister survive a tragic accident as teenagers and compose a song, which catapults them to fame. The first half of the movie tracks their trajectory, with Celeste becoming the on-stage sensation, while her sister Eleanor takes creative responsibilities. In the second half, set in 2017, 31-year-old Celeste now has a daughter and must navigate her life as her career becomes rife with scandals and another act of violence sends her reeling.

The song, “Wrapped Up,” was written by Sia for the film and performed by Portman.

It hits theaters Dec. 7. Watch the full trailer above.