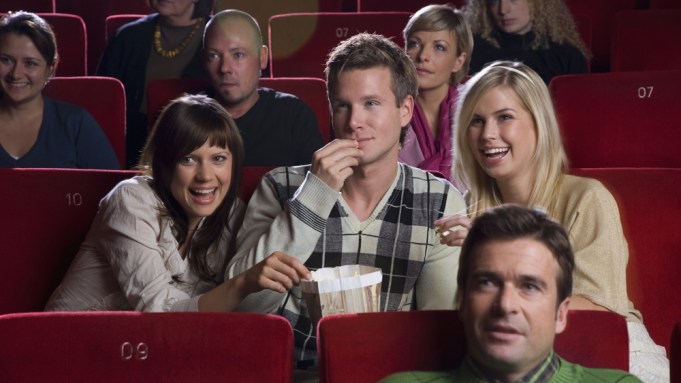 The ground is shifting under the exhibition industry’s feet.

The latest evidence of the tectonic moves taking place was Wednesday’s announcement that AMC is launching its own subscription-based program, a MoviePass rival it has dubbed A-list. The move is a concession to a new reality: Moviegoers are more interested in a value proposition than a lavish night out.

It also suggests that the theatrical movie business has been Netflix-ized. People are now used to paying for content in monthly packages, and they’re sick of shelling out as much as $20 a pop to see a movie in theaters.

“The whole U.S. economy is moving towards a subscription model,” said Eric Handler, an analyst with MKM Partners. “It’s not just Netflix or Hulu. You’re seeing all these subscription over-the top-services like CBS All Access springing up. It’s even going into video games and throughout all areas of media. It’s what consumers want.”

For years, movie theaters barreled down a different path. To paper over declining attendance, they jacked up prices and justified it by adding more amenities. Since 2002, ticket prices have increased more than 50%, while ticket sales have fallen more than 20%. Younger audiences, the same generation weaned on streaming services like Netflix, have proved to be particularly difficult to reach.

In response, theater chains such as AMC and Regal have talked up the premium nature of their experience. They’ve spent tens of millions of dollars tossing out old seating and replacing it with plush recliners; they’ve added beer and wine to their menus along with table service; and they’ve encouraged viewers to shell out more money to see movies in IMAX or 3D.

But it turns out that moviegoers didn’t just want chairs big enough to double as La-Z-Boys. At a time when they were juggling cellphone bills and cable bills, while grappling with wage stagnation and crushing student loans, all they really wanted was a deal. That’s part of the reason MoviePass, an upstart with ambitions bigger than its pockets, was able to attract three million customers after slashing its a movie-a-day monthly plan to less than $10. In some ways, the service didn’t properly anticipate the pent-up demand it was unleashing. Filings by its parent company Helios & Matheson with the SEC reveal that it is dangerously under-capitalized, with the monthly costs of operating MoviePass far outstripping its cash on hand.

MoviePass deserves credit for upending a tired business model, even if a jaundiced eye should be applied to its longterm financial planning. But if it fails — as many critics think it will — the disruption in the exhibition space that it helped spur is here to stay. Cinemark already has a half a million subscribers for its subscription service, and AMC is ready to spend $5 million hawking its new, costlier $19.99 monthly plan. In Europe, at places such as the AMC-owned Odeon, subscription plans are an increasingly popular option. Expect other chains both here and abroad to follow suit.

AMC, which has had a …ahem… frosty relationship with MoviePass, wasn’t ready to give the service credit for encouraging its own dive into the subscription deep end. In a phone call with analysts, AMC CEO Adam Aron said the company had been studying the model for two years, long before MoviePass slashed its prices. Without addressing MoviePass by name, Aron made it clear that A-list sees itself as a more “sustainable” challenger to a company that’s in a financially precarious position.

There are some major challenges that AMC will need to address. Most importantly, it must convince consumers that its service is worth the extra cost. MoviePass gives viewers the right to see a movie a day in nearly any movie theater, but they can only watch films in 2D and tickets have to be purchased close to showtimes. AMC will allow its subscribers to see three movies a week in premium formats such as IMAX and 3D. It also lets users reserve seats. Will that be enough?

In the short term, AMC, like MoviePass, is willing to lose money to establish itself in the marketplace. Aron said AMC will take a $10 million to $15 million hit over the next two quarters as customers begin to transition to the low-cost offering. He also predicted there would be some cannibalization, with more frequent moviegoers, accustomed to paying the full price for tickets, transitioning to the discounted service. The hope is that by increasing foot traffic, AMC will boost concession sales (all that high-margin popcorn!) and more than pay for any loss at the box office.

And the studios? They’re not taking a financial hit. Instead, they’ll be getting the same amount they would have earned regardless of whether or not the ticket to their film is purchased on a la carte or using a subscription service. If the result is that AMC is able to increase attendance, those terms could shift, as could the pressure on studios to release more movies. As it stands, major studios have pruned the number of films they make annually — and that decline should accelerate when Fox sells to Disney or Comcast. Its unlikely that a new owner will continue to maintain the output that Fox maintained as a standalone studio.

But those are issues for another day. For MoviePass, the great disruptor gets the comfort of knowing it pushed the exhibition industry kicking and screaming into an uncertain future.

“The MoviePass Effect has made its mark and the model is here to stay,” said Mitch Lowe in a statement shortly after AMC announced its own service.

The only problem is that MoviePass might not be alive long enough to reap the rewards from the revolution it helped ignite.