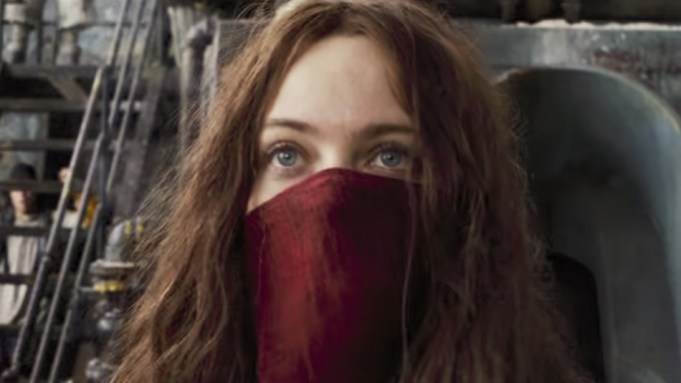 Universal has released a unique first trailer for “Mortal Engines,” depicting a world of predator cities existing thousands of years after current civilization has been destroyed by a cataclysmic event.

“We have to stop London before it destroys us” is one of the lines in the FX-heavy footage, released Tuesday.

Peter Jackson is on board as a producer and screenwriter, re-teaming with “Hobbit” screenwriters with Fran Walsh and Philippa Boyens in “Mortal Engines,” set in a steampunk world where entire cities have been mounted on wheels and prey on one another. It’s Jackson’s first feature project since the completion of the Hobbit trilogy in 2014.

Robert Sheehan stars as museum apprentice Tom Natsworthy from the city of London who finds himself fighting for his own survival after he encounters the dangerous fugitive assassin Hester Shaw, played by Hera Hilmar, who’s out to avenge the death of her mother. They forge an unlikely alliance that is destined to change the course of the future. Hugo Weaving, Jihae, Ronan Raftery, Leila George, Patrick Malahide, and Stephen Lang also star.

“Mortal Engines,” directed by Christian Rivers, was shot entirely in New Zealand. The Universal and MRC movie is adapted from the book series by Philip Reeve, published in 2001. Besides Jackson and Walsh, the other producers are Zane Weiner, Amanda Walker, and Deborah Forte. Ken Kamins joins Boyens as an executive producer. Universal will distribute the film worldwide.

The film opens Dec. 14. Watch the trailer above.