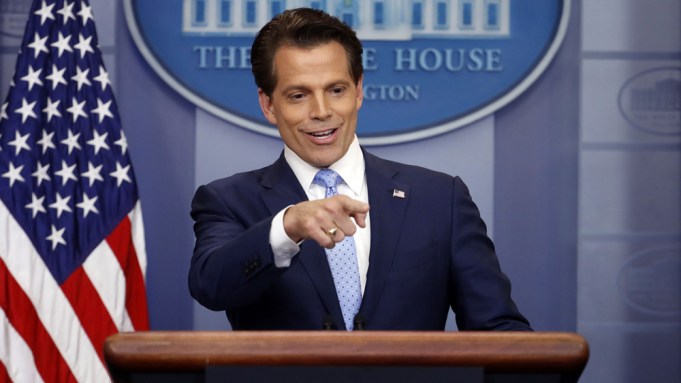 Anthony Scaramucci is moving from television to the big screen with a new documentary, “Mooch.”

Directed by Andrew J. Muscato, the documentary follows the former White House official’s rise inside the Trump administration, using news footage and interviews with both colleagues of Scaramucci and the political personality himself.

The first trailer, which dropped Thursday, opens with a flurry of news clips to introduce the fiery news persona that Scaramucci has cultivated over the past couple of years. During a scathing interview with the New Yorker last year, Scaramucci took aim at former White House official Steve Bannon, saying “I’m not Steve Bannon, I’m not trying to suck my own c–k.” The statement, along with others made on Twitter, all cultivated in the loss of Scaramucci’s job as White House communications director just ten days after he began, but that doesn’t stop Muscato from highlighting the controversy within the first few seconds of the trailer.

Soon after, upbeat banjo playing accompanies the words “But honestly how the %@$! did he get there?,” before cutting to clips of Scaramucci getting his makeup done and calling a document “a capitalist jihad.”

Scaramucci also speaks for himself in a clip from one of the documentary’s own interviews. “I’m a nice person, but don’t confuse niceness with weakness,” he says.

Watch the full trailer for the documentary above.