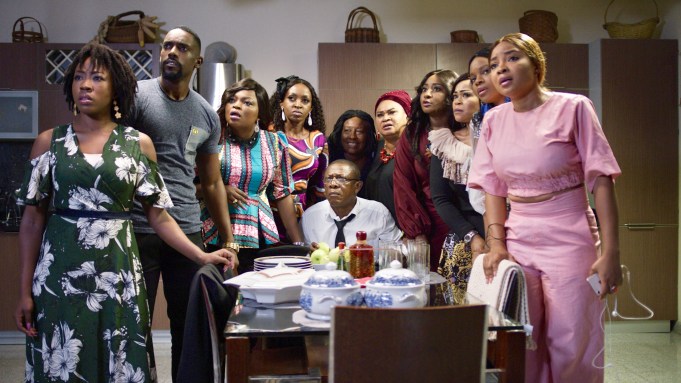 When an extravagant, exuberant billionaire patriarch drops dead at the dinner table, a mad scramble for his fortune ensues among his extended family, household staff and a few mistresses. EbonyLife, the Nigerian lifestyle TV network and production company, is also hoping to strike gold with “Chief Daddy,” a new ensemble comedy starring some of the most famous actors in Africa’s most populous nation.

“Even we haven’t…done a feature film that has this much star power,” Abudu said.

Abudu became a household name in Nigeria more than a decade ago with her long-running daytime talk show, “Moments With Mo.” Since then, she has inked deals with Netflix and Disney. This year, EbonyLife struck a three-series deal with Sony Pictures Television; the first project will tell the story of the female warriors of the ancient West African kingdom of Dahomey.

Launched as an upscale TV network in 2012, EbonyLife produced its first feature film, “Fifty,” in 2015. The following year, its glitzy romcom “The Wedding Party” grossed 450 million naira (about $1.2 million), making it the most successful Nigerian film of all time. Last year, that record was broken by its sequel.

With “Chief Daddy,” Abudu said she wanted to do “something comical and heartwarming” around the holiday season, targeting the same release window as her previous smash hits. “Christmas is family time,” said Abudu. “It’s a time where everyone just wants to get together [and] go to the cinema.”

“Chief Daddy” was written by Bode Asinyanbi and directed by Niyi Akinmolayan, who helmed “The Wedding Party 2.”

Abudu’s vision for EbonyLife is to share African stories with a global audience. “We’ve gone into development on historical stories. We’re looking at fantasy and futurism. We’re looking at modern-day Africa,” she said.

EbonyLife recently opened an office in Britain. Abudu is determined to find more international partners who are “looking for authenticity. They’re looking for something different, something fresh for their slate,” she said. “There’s a new scramble for Africa, and we have stories that…global audiences will enjoy.”