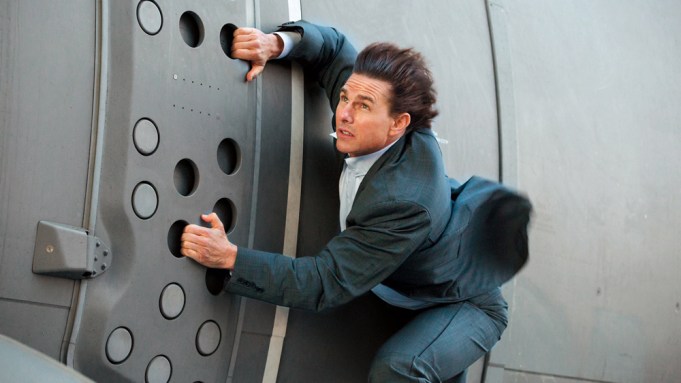 Tom Cruise is known for performing his own stunts, and a featurette from Paramount Pictures proves that “Mission: Impossible — Fallout” will be no exception.

A new behind-the-scenes video focuses on the training and challenges faced by the crew while filming the movie’s real stunts. Several scenes involve helicopters, including a dangerous 360 degree barrel roll that was featured in the film’s trailer.

“Flying a helicopter takes a lot of skill,” aerial coordinator Marc Wolff says in the clip. “To put someone like Tom in a situation like this is almost impossible to imagine.”

According to stunt coordinator Wade Eastwood, it was important to Cruise that all the film’s stunts be done practically and without the aid of green screens or computer generated special effects. This meant that Cruise needed to learn to fly a helicopter and accrue the requisite 2,000 in-flight hours before performing any of his helicopter scenes.

Special camera rigs were created that allowed the crew to film inside the helicopter while it was flying to emphasize that Cruise was actually piloting the aircraft.

In August, Cruise sustained serious on-set injuries after slamming into a wall while filming a stunt for “Fallout,” which caused a delay in production.

Cruise also performed his own stunts in last year’s reboot of “The Mummy,” where he shot 64 takes of a plane crash sequence in zero gravity. In “Mission: Impossible — Ghost Protocol,” Cruise hung off Dubai’s Burj Khalifa skyscraper, the tallest building in the world, and was strapped to the wing of a moving plane for a scene in “Mission: Impossible — Rogue Nation.”

The upcoming sixth installment in the spy series also stars Rebecca Ferguson and Alec Baldwin — who will reprise their roles from previous films — while Henry Cavill, Angela Bassett, Vanessa Kirby, and Sian Brooke join the cast. Directed by Christopher McQuarrie, the film follows Cruise’s Ethan Hunt and team as they race against time after a botched mission.

“Mission: Impossible — Fallout” lands in theaters on July 27. Watch the full featurette above.