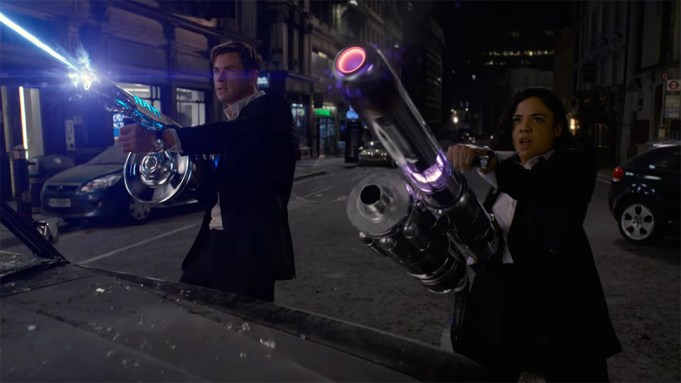 After proving their onscreen chemistry in “Thor: Ragnarok,” Tessa Thompson and Chris Hemsworth are back on the front lines in the trailer for F. Gary Gray’s latest “Men in Black” entry. This time, the stars are trading in their Asgardian armor for agency issued black suits.

“The universe has a way of leading you to where you’re supposed to be at the moment you’re supposed to be there,” Liam Neeson’s character, the head of the UK branch of MIB, says in the new clip. After Thomason and Hemsworth team up, the footage launches into a montage of action-packed sequences with the agents touting heavy armor and sleek looks.

Following a series of blockbusters, “Men in Black International” marks the first time the franchise has broken away from the film’s original stars Will Smith and Tommy Lee Jones. As agents in a secret organization called the Men in Black, Smith and Jones protected the Earth from a host of intergalactic enemies, and the pair’s hilarious interactions led the series to huge success when it first hit theaters in 1997.

“Men in Black International” is set to hit theaters June 14. Watch the trailer above.