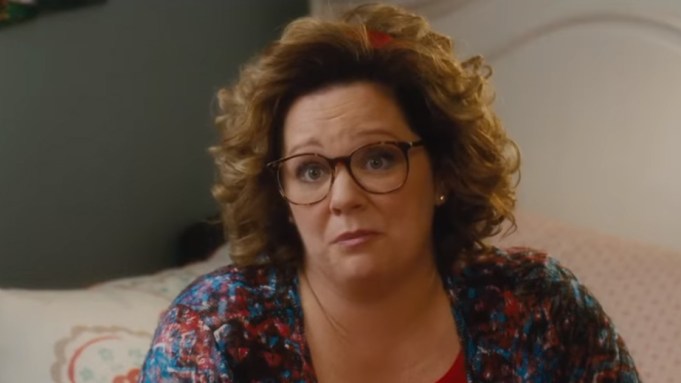 Melissa McCarthy is headed back to school in the first trailer for her film “Life of the Party,” which debuted Monday on “The Ellen DeGeneres Show.”

McCarthy stars and her husband, Ben Falcone, directed the comedy — which appears to be partly derived from Rodney Dangerfield’s 1986 hit “Back to School.” One major difference, however, is that the film starts with her husband unexpectedly leaving her, leading to McCarthy’s character collecting a big pile of remembrances of her married life and setting them on fire.

She tells her daughter, played by Molly Gordon, that she’s joining her at school, asserting, “I don’t regret staying home and being your mom, but I regret not getting my degree.”

The trailer features McCarthy’s character getting a makeover from her daughter and shocking her best friend, played by Maya Rudolph, by having what looks like sex in the campus library. “Modern Family” star Julie Bowen, Chris Parnell, and Gillian Jacobs also star.

New Line has given “Life of the Party” a prime summer release date of May 11, which is Mother’s Day weekend. McCarthy and Falcone wrote the script and are producing through their On the Way production company, along with Chris Henchy (“Daddy’s Home”). McCarthy and Falcone also teamed on 2014’s “Tammy” and 2016’s “The Boss.”

During Monday’s “Ellen DeGeneres Show,” Falcone and McCarthy donated a total of $75,000 to a mother-daughter duo from the audience: Chassidy Jackson-Goodwin and daughter Jaida Jackson.