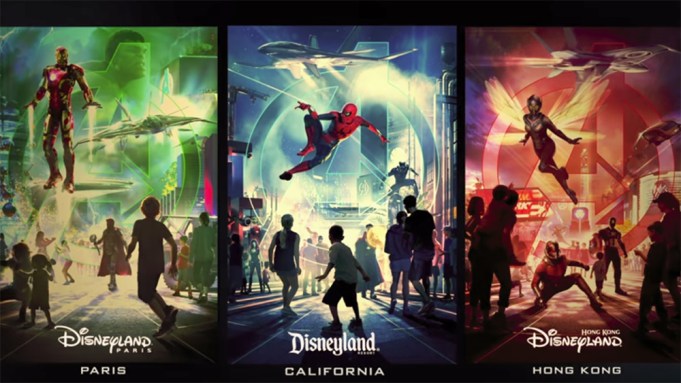 Disney is amping up its Marvel superhero attractions at the Disneyland Resort in California, Disneyland Paris, and Hong Kong Disneyland in 2020.

The Walt Disney Company announced Tuesday that the California Adventure part of the 63-year-old Disneyland Resort in Anaheim, Calif., will see the Guardians of the Galaxy, Iron Man, Spider-Man, and other characters from the Marvel Cinematic Universe in attractions and a new live show in 2020. Disney said the new attractions have been developed in partnership with Marvel Studios and Marvel Themed Entertainment.

The California Adventure attraction will become a “completely immersive Super Hero universe,” anchored by “Guardians of the Galaxy – Mission: BREAKOUT!” in the space currently occupied by the kiddie attraction “A Bug’s Land.” The park closed “It’s Tough to Be a Bug” on March 19 and the rest of the land will close in late summer.

At Disneyland Paris, the new Marvel-themed area will include an attraction where riders will team up with Iron Man and other Avengers on a “hyper-kinetic adventure” in 2020. Disneyland Paris will host “Marvel Summer of Super Heroes” stage show from June 10 to Sept. 30.

Hong Kong Disneyland will see a new themed area which will include an attraction where guests team up with Ant-Man and the Wasp. That new attraction will join the “Iron Man Experience,” which opened in 2017 and is already the most popular attraction at the resort.

Disney bought Marvel in 2009 for $4 billion in what turned out to be a bargain for the entertainment giant.